Phoenix (フェニックス, fenikkusu) is a character in the Beyblade: Metal Fusion anime and manga. He is actually Ryo Hagane, Gingka Hagane's father in descise. He owns Burn Fireblaze 135MS.

Phoenix is always dressed in a red coat, reaching down to his knees. He also constantly wore a metal mask and wig to hide his identity. He wears a black/brown shirt and long pants for the time being and carries Burn Fireblaze on his belt. However, from episode 49 onwards in the anime, he changes his appearance back to Ryo Hagane, since his identity was revealed in episode 48.

Gingka's father, Ryo Hagane, survives Ryuga's attacks, and goes in search of his son with his new Beyblade Burn Fireblaze 135MS and hides him, he goes to find his son as the Legendary Beyblader, Phoenix. He is then seen watching Kenta in the battle with Dan and Reiki, and Gingka in the battle royal. He battles with Gingka afterwards. During Battle Bladers he faces Doji in a battle, afterwards he is revealed to be Gingka's father.

He is first seen in the episode Oath of the Pheonix in which he appears to save Gingka's life but then Gingka had to pay him back with battle blader points. This is when he challenges Pheonix to a battle. Pheonix tells him that his starblast attack is useless as his Fieblaze can fly and attack. He is then able to defeat Gingka with Burning Fire Strike. The points are unneeded and Pheonix smashes them.

He is next seen to save Tsubasa in episode 36 from losing to Ryuga and they talk in a campfire. It is then revealed that Tsubasa is a spy for WBBA. Tsubasa then is trying to make it up to Gingka by telling him he quit although he didn't listen. Then Pheonix once again arrives to assist Tsubasa in episode 38. In episode 39 he battles Gingka because he wasn't going to make it to Battle Bladers. He then loses after Gingka reveals a new special move to him Stormbringer. Giving him back his points.

Next seen in episode 48 battling Doji, defeating him in breaking his legs. But then his mask is broken and his identity as Ryo Hagane.

Ryo is seen in Metal Masters not Pheonix and he has the same obsession with the eternal bird Pheonix.

While In the manga, he mysteriously appears at the Battle Blader tournament. He somehow has the ability to create new beyblades out of broken ones, as can be seen when he transformed Kenta's smashed Sagittario 145S into Flame Sagittario C145S . During the tournament, Phoenix makes thorough observations of both Kenta and Gingka through their matches.

Burn Fireblaze 135MS: (Burn Phoenix 135MS in the Japanese version) is Phoenix's Beyblade in both the anime and manga. 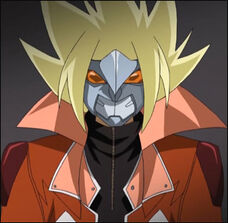 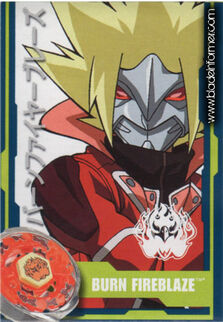 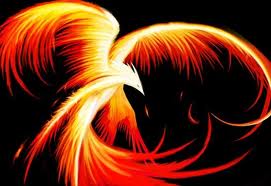 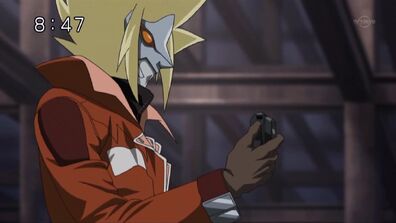 Add a photo to this gallery
Beyblade Wiki:Characters
Retrieved from "https://beyblade.fandom.com/wiki/Phoenix?oldid=159442"
Community content is available under CC-BY-SA unless otherwise noted.