Poison Pegasus ED145JB is an Attack-Type Beyblade and was released in the Face-Off 2-Pack Poison Fury Showdown with a recoloured version of Fury Capricorn 100HF.

The Facebolt depicts Pegasus, the magical winged horse that soared into the heavens for the Greek god, Zeus. Pegasus is one of the 88 constellations in space. The design is the exact same as the Storm Pegasus motif, but has a few modifications. Firstly, the head of Pegasus has lost its colour; now being outlined in a sky blue, while the characters "P" and "S" near Pegasus' face are also a sky blue and have thin gaps cutting around at each other. The whole Pegasus motif is printed onto a Yellow, Red and Mahogany Face Bolt.

Pegasus is the first of the Pegasus family of energy rings and as its name suggests, it is designed in the manner of a Pegasus's wings and head. As such, Pegasus is constructed of a plastic (specifically polycarbonate) and is meant to fit into the Fusion Wheel to provide weight distribution. It is primarily two-sided, with Pegasus's wings, appearing curved in two slots with various edges and gaps, while going into the neck of Pegasus which reaches into Pegasus's horse-like face. Pegasus also features stickers that emulate lightning-bolts while on a blue background. This version is the same of Storm Pegasus 105RF, but with a dull dark red shade.

Poison is a Fusion Wheel similar to Dark, Mad and Heat but with much better Smash Attack caused by the larger gap between the spikes. It has a number of fifteen blades in total but however, the Poison Wheel suffers more recoil than Dark, Mad, and Heat. This is one of the least useful pieces of this Beyblade. The Fusion Wheel Poison is very close to Dark only it has 15 blades instead of 12. This piece is not recommended for battles because it suffers from large amounts of recoil making this a terrible Fusion Wheel for Attack and Stamina. It can kind of deflect attacks if used with a low spin track, making it barely a decent piece. If used, it is recommended to use it with a Metal Face. Attack: 3 - Defense: 3 - Stamina: 1

ED145 features three “hooks” which rotate around the Track freely. Unlike WD145, ED145 can spin freely, they can be used in Defense customisations, such as MF Earth Bull ED145WB; however, the defensive capabilities of this part are not as effective as C145, as it does not absorb hits as successfully. The wings which rotate are hindered without the mechanism of a bearing, hence creating a force of friction between the wings and the body of the Track, in turn resulting in less significant damage absorption. Furthermore, it is easy for the low attacker’s Wheel to be caught between the Wheel and ED145, hence causing a lot of recoil and spin reduction to the Defense customization. The free spining feature however does not ensure it will not have any recoil. The "hooks" can be stick on the opposing bey and get stuck. As the Beyblade is spinning and the ED145 is free spining, the Bey can be stuck and lose Stamina because of friction.

Jog Ball is a normal Ball sized tip with more Defense due to the little rounded spikes on it to grip onto the stadium when it is hit. This performance tip serves as a medium between B and WB. 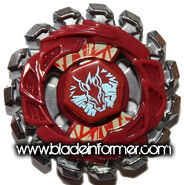 poison pegasus .
Add a photo to this gallery
Retrieved from "https://beyblade.fandom.com/wiki/Poison_Pegasus_ED145JB?oldid=357135"
Community content is available under CC-BY-SA unless otherwise noted.