Poison Serpent SW145SD is a Balance Type Beyblade released as part of the Hybrid Wheel System.

The Face Bolt depicts "Serpens", one of the 88 constellations in space. The constellation represents a snake being tamed by the snake-handler, "Ophiuchus". The design is a green cobra showing its deadly sharp teeth on a red background.

Poison has fifteen rectangular protrusions on its circumference, each the same size and about 4 mm apart at the widest point. While this is not wide enough to provide useful Smash Attack, it still produces relatively large amounts of Recoil, making this part useless for Defense or Stamina. Furthermore, similar to Flame, the Metal Wheel is raised at the base, exposing the Track to opposing Beys, making it even less useful for Defense purposes.

Just as the Semi-Flat Bottom has a sharper tip than Flat, so too does Semi-Defense when compared to Defense. Before the release of SD, D was the absolute best Stamina Bottom available, but SD quickly took over the top spot, as is evidenced by the following tests: 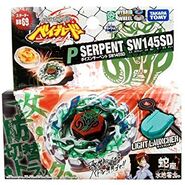 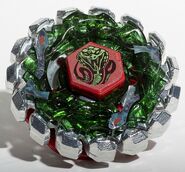 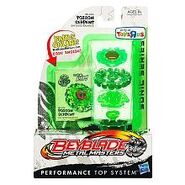 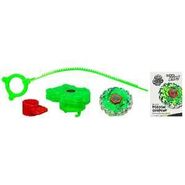 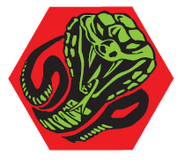