The Face depicts Serpens, the Serpent, one of the 88 constellations in space.

Poison has fifteen rectangular protrusions on its circumference, each the same size and about 4 mm apart at the widest point. While this is not wide enough to provide useful Smash Attack, it still produces relatively large amounts of Recoil, making this part useless for Defense or Stamina. Furthermore, similar to Flame, the Metal Wheel is raised at the base, exposing the Track to opposing Beys, making it even less useful for Defense purposes. This Recoil is worsened by the light weight of the Wheel, which allows it to be easily knocked around and KO'ed by opposing Beys. This means it has little to no use for Attack either. Due to these factors, Poison has absolutely no competitive use. 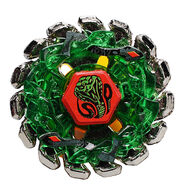 The only real reason to buy this is SD, which can be obtained from the more useful Dark Bull H145SD. While SW145 has some use, there are generally better alternatives. There is little or no reason to buy this Beyblade, aside from collection purposes.

Retrieved from "https://beyblade.fandom.com/wiki/Poison_Serpent_SW145SD?oldid=300556"
Community content is available under CC-BY-SA unless otherwise noted.