Poison Virgo ED145ES is a Balance Type Beyblade that only appears in the Beyblade: Metal Masters anime series. It is the evolution of Virgo ED145ES. It is owned by Chao Xin.

The Face Bolt depicts Virgo, the sixth astrological sign of the Zodiac and one of 88 constellation in space . Virgo is Latin for "Virgin". The bolt shows a dancing woman with long flowing hair. Unlike the previous Virgo motif, it does not contain any letters. It is green and black in color.

Virgo was first released in a translucent yellow color. Virgo has a smooth, flowing design to emulate a woman's hair, and features a small notch on both sides, which makes it look very elegant. Hasbro's release is in translucent blue.

Poison is a Fusion Wheel similar to Dark, Mad, and Heat with much better Smash Attack, caused by the larger gap between the spikes but less stamina due to more gaps for air to slow down. It has a number of fifteen blades in total but however, the Poison Wheel suffers more recoil than Dark. This wheel consists of Attack and Defensive qualities. However its Stamina is terrible. When used with low spin and bottoms tracks like 100/90 and JB/MB/WB/RB/RS/RSF, it can deflect some attacks. It shouldn't be used for competitive play.

ED145 features three "wings" which rotate around the Track freely. The wings are similar to those of WD145 and can expand from its normal size if pulled outward. Because of their free-spinning nature, they can be used in Defense customizations, such as MF Earth Bull ED145WB; however, the defensive capabilities of this part are not as effective as C145, as it does not absorb hits as successfully. The wings which rotate are hindered without the mechanism of a bearing, hence creating a force of friction between the wings and the body of the Track, in turn resulting in less significant damage absorption. Furthermore, it is easy for the low attacker’s Wheel to be caught between the Wheel and ED145, hence causing a lot of recoil and spin reduction to the Defense customization. When used with AS/WD/EWD/ES/HF\S it can minimize recoil from almost any floor-scrape. This is the only feature that its successor, TR145 doesn't have.

Eternal Sharp features a free-spinning Tip attached to a metal shaft which is held by the Performance Tip. The part was one of the most heavily anticipated parts in the Metal Fusion lineup, when first announced, but ES is actually a hugely disappointing part in terms of performance, and it has problems of balance when used with the Poison Metal Wheel , and the ed145 spin track.

Firstly, ES lacks a metal bearing, which would significantly reduce the friction between the free-spinning Tip and the rest of the Bottom. All of the best free-spinning Tips, notably Bearing Core, had NSK Shield bearings which allowed unhindered spin.

Secondly, the Tip shape of ES is not conducive to optimum Stamina; the Sharp nature of the Bottom means it is easily destabilized. As all Sharp Tips do, Eternal Sharp also has trouble regaining Balance, hence making this a poor choice for Stamina. That said, ES still remains superior to BS/S/ as Stamina Bottom. This bottom allows the user to tilt at extremely low angles without floor scrapes, however, it cannot regain its balance in this state unless it hits its opponent and having the impact bounce itself back up. If it is hit from behind when tilting like this, it has a 95% chance of being out spun unless used with ED145. Due to the gap between the contact point of the tip and the slot the tip is inserted into, some users experience lots so movements from this tip, giving the Bey both Attack and Stamina. By using that movement/speed, it can weaken the impact if its is attacked by an Attack type. Its Stamina levels reign equal to SD. As a Stamina bottom, it is outclassed by B:D and EWD due to more Stamina (B:D can spin over 7 minutes if undisturbed while EWD combines the amazing Defense of WD while retaining ES's superior Stamina). However, these bottoms do not provide the speed/movement/height ES provides. The height of ES can turn a 125 height-user to a 155 height. It is the opposite of the AS bottom.

This is a good Performance Tip for starters who would like to focus on Stamina. 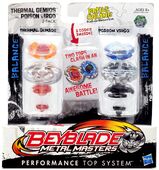 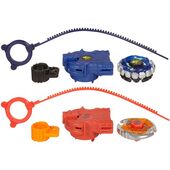