Poison Zurafa S130MB (Known as Poison Giraffe S130MB in Japan) is a Defense-Type Beyblade originally released in the Attack and Defense Set. It was released separately by Hasbro. This Beyblade has recommended parts, specifically S130 and MB.

The Face Bolt depicts a Qilin. The Qilin or Kirin/Kyrin, was a mystical hooved Chinese chimerical creature known throughout East Asian cultures. It is a good omen that brings "rui" (serenity or prosperity) and is often depicted with fire all over its body. The design is a green Qilin with "GIRAFFE" across it.


Zurafa is an elliptical Energy Ring featuring a scale-like relief on its interior, an opaque flame-like design along the points of the ellipse, and a small protrusion on either side. Zurafa’s uneven weight distribution and non-circular shape cause it to be outclassed by Gasher, Cygnus, and Darkhelm for Stamina and Defense. While one might guess that it pairs well with several Attack-type Fusion Wheels due to revealing or putting weight behind their contact points, this is only the case for the outclassed Vulcan Fusion Wheel, and Zurafa does not perform well on the more powerful Flash when compared to Scorpio, Orion, and Gemios.

MB is a variation of the Ball tip, with its bottom surface made fully out of metal. It has a wide surface area and heavy weight, making it a very versatile tip. Being metal, it provides the low friction needed for longer endurance. Its lack of traction makes it very easy to KO and destabilize. As such, it has only found a home in a small number of combos.

Use in Balance Customization

MB is a vital piece in the Duo combo MF-H Duo Aquario/Cancer/Cygnus 230MB. This combo works as a wobbler combination. Due to the maximal height and the ball-shaped tip, the combo has the ability to wobble at extreme angles and recover. It uses destabilization and force grind to defeat opponents. Because of the nature of MB, its greatest weakness is Attack types however.

Use in Defense/Balance combo Customization

Although now outclassed, the combo MF-H Basalt ___ BD145MB was one of the first combinations to find competitive use with Metal Ball. This combo has good synergy which means that, as a whole, it works well together. Due to its heavy nature, it couldn’t be knocked out easily. Metal Ball also worked well with BD145 as it requires tall tips to avoid scraping. Lastly, this Bottom can go into aggressive movement patterns if launched a certain way, which works well with Basalt's nature to knock out and/or destabilize others combos. 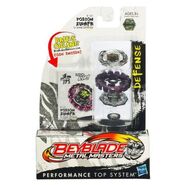 Retrieved from "https://beyblade.fandom.com/wiki/Poison_Zurafa_S130MB?oldid=300547"
Community content is available under CC-BY-SA unless otherwise noted.