Nemesis X to the Proto Fusion Wheel is sort of like the BD145 to the Hades Fusion Wheel, since they fit perfectly underneath the Fusion Wheel. The Energy Ring is at the place where the Fusion Wheels are usually (above the spin track). It is made completely of plastic. You can put a regular energy ring on it, but it will become a fully plastic bey and won't have enough weight to be used competively.

Armor Defense 145 (AD145) is shaped like the head of a funnel, being primarily circular with two curved protrusions that line down in order to act as an armor, hence the name and to defend against hits. There are also two smaller protrusions between it, creating gaps and is a translucent red. It's the same Track as the one that Gravity Destroyer AD145WD has. Just like in its original release with the Gravity Fusion Wheel, even though it was labeled for Defense, it was overshadowed by Spin Tracks like GB145 and 230 as it cannot absorb hits as efficiently and is too light for Defense. Due to this, it has found to be a top-tier Spin Track for Stamina customs instead, because of its unique design it distributes weight more evenly, providing more stamina than a regular 145. It looks very simiar to the top of the spin drive for Diablo Nemesis.

The Defense Bottom, which acts as a wider version of a Sharp Tip. When hit by an opponent, a Beyblade with this Bottom will have lessened recoil and will recover from attacks more efficiently than a Sharp Tip. However, while recovering, the Defense Bottom will cause the Beyblade to lose some Stamina, caused by the added friction. The Defense tip is now outclassed by SD, PD WD & EWD for Stamina. It has a little bit of attack; moving in the stadium on the begin of the battle and is decent for stamina; being compared with Sharp and Defense Sharp. 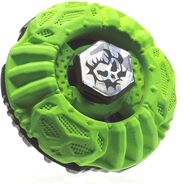 Retrieved from "https://beyblade.fandom.com/wiki/Proto_Nemesis_AD145D?oldid=314633"
Community content is available under CC-BY-SA unless otherwise noted.