Quake Shielzam DF145D is a Beyblade that only appears in the Beyblade: Metal Fusion - Battle Fortress video game. It is owned by Mamoru.

Shielzam depicts the Tucana or Toucan constellation. It shows the head of the toucan with Shielzam written.

The energy ring is an aqua colour.

The fusion wheel is probably a defensive fusion wheel, with four rounded blades. Each blade has three spherical protrusions on it.It is very small.

DF145 has four upward facing wings protruding from the top of the Track, which aside from giving it extra weight are meant to push air downwards. It is now outclassed for use in Stamina combinations. Instead, Tracks such as AD145, 145, 100, 90, and even 85 are used.

This is a Defense Bottom, which acts as a wider version of a Sharp Tip. When hit by an opponent, a Beyblade with this Bottom will have lessened recoil and will recover from Attacks more efficiently than a Sharp Tip. However, while recovering, the Defense Bottom will cause the Beyblade to lose some Stamina, caused by the added friction. It was outclassed by WD, SD for Stamina. When 230 was released, D was no longer outclassed. 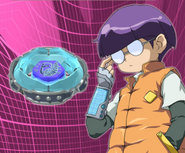 Mamoru and Quake Shielzam DF145D
Add a photo to this gallery
Retrieved from "https://beyblade.fandom.com/wiki/Quake_Shielzam_DF145D?oldid=304387"
Community content is available under CC-BY-SA unless otherwise noted.