Quetzalcoatl 90WF is an Attack-Type Beyblade that could be obtained from a Bey Ta 1 machine by beating it, or by trading in five sub-license cards to the WBBA up until August 2009. It was also released with the March 26, 2010 re-release of Metal Fight Beyblade DS as a re-color. It is one of the 4-layer Beyblades without a Legend Version.

Quetzalcoatl consists of two large wings which have a long slope upwards towards the top and then small curved slope downwards at the wings peak, along with two smaller protrusions on a slight incline in the gap between the wings. At first glance, the wings of Quetzalcoatl would appear to display both Upper Attack and also some slight Force Smash. Upon closer examination, however, it becomes clear that it displays neither of these traits in battle. In addition, the two protrusions between the wings do not protrude far enough to come into regular contact, and the Wheel itself is quite rounded, leaving it with only two major contact points and relatively moderate Smash Attack, when compared to Wheels such as Vulcan and Lightning that have since been released.

Quetzalcoatl was once considered the best Attack Wheel available, but has since been outclassed by Wheels such as the ones listed above.

Before the launch of Metal Fight Beyblade, early promo images of what was supposedly the initial lineup were released. They displayed renders for Pegasis, Cheiron (renamed Sagittario), Leo (renamed Leone), Bull, Cancer and Quetzalcoatl. However, when MFB was launched in August of 2008, the Beyblade labeled as "Cancer" in the promo images was released as "Quetzalcoatl", the Wheel described above. Furthermore, when inspecting the design of "Quetzalcoatl" itself, it becomes obvious that the design is derived from the appearance of a crabs claws. Even the Cancer Face itself features claws that are similar in design to the "wings" of Quetzalcoatl.

There has been speculation as to why TAKARA-TOMY chose to release Cancer as Quetzalcoatl, however one of the most likely reasons was that the original Wheel labeled as Quetzalcoatl was visibly quite brittle; a fact that is further emphasized by TAKARA-TOMY's subsequent martyrization of the Wheel in various promotional images that followed, as is pictured to the right. As can be observed in those images, the slopes on the Wheel are clearly "feathery" as the deity Quetzalcoatl is described to be, and below the slopes, there are "scales", which relate to the fact that the deity is a "feathered serpent".

The original Quetzalcoatl Wheel has never been released in any form.

90 was the lowest Track until the release of 85 with Mercury Anubis. Its low height is good for both low Attack customizations and low Stamina customizations, but is outclassed slightly in both regards by the aforementioned 85.

WF, like the name suggests, is a wider version of F. Its significantly larger surface area allows it to travel much faster than F. However, due to the fact that it is plastic, it is slower than RF, as it does not produce as much friction with the stadium floor and is not able to neutralize the recoil of certain Wheels as efficiently as RF. It has also much more trouble maintaining the "flower pattern" from a Sliding Shoot due to this. The upside to its lower friction is that it has much better Stamina than RF, allowing it to be used in destabilizing attackers.

While Quetzalcoatl and 90 were staples in the early Metal Fight Beyblade metagame, they have since been outclassed. WF as a pure Attack bottom is outclassed as well, although it still finds a niche in destabilizing attacker customs. There is little reason to own this Beyblade outside of collection purposes.

Another CoroCoro promo with the prototype Quetzalcoatl Wheel

The original Quetzalcoatl Wheel being used in a HWS promotional image. 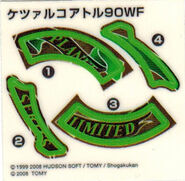 WF
Add a photo to this gallery 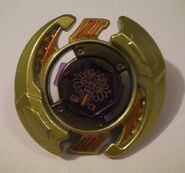 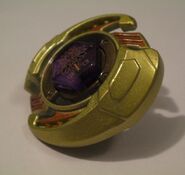 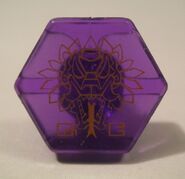 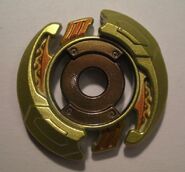 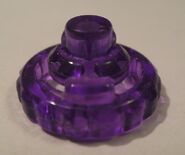 90 and WF
Add a photo to this gallery

Retrieved from "https://beyblade.fandom.com/wiki/Quetzalcoatl_90WF?oldid=380719"
Community content is available under CC-BY-SA unless otherwise noted.