This Spirit Axle depicts Fireblaze which is facing left with its wings spreading to right. Fireblaze itself on the Spirit Axle is in red, but the background is yellow in color.

On each side of the shield has two phoenix talons and Phoenix heads looking upwards. It is also useful for customization. it is bright scarlet in color.

It has three points all a round the Energy Core this helps it to gain speed as it rolls just like toxic. It is Good against Soaring Wing Pegasus. Raging also is good for power types. it is very heavy and thick for a speed based core. It is in pale firey shade of orange.

It has 2 Phoenix head designs that do minor damage. It also has 6 spikes that form claws/wings that do a lot of damage. it is vary wide for a power based attack gear. like Fireblaze, it is bright scarlet in color. 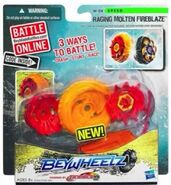 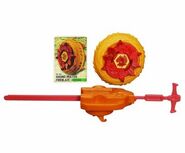 Add a photo to this gallery
Retrieved from "https://beyblade.fandom.com/wiki/Raging_Molten_Fireblaze?oldid=423486"
Community content is available under CC-BY-SA unless otherwise noted.