During his first introduction, he is portrayed as a powerful and confident competitor. However, some may say that he is shown as overconfident in some aspects, especially before the battle against Tyson had even begun. Throughout the first season, Ray is looked to for advice about battles. He is generally revered as a kind-hearted, polite individual, who is very welcoming when meeting new people. He is also shown as being very open minded, especially about beyblading techniques. This is emphasized in the Asian tournament, used by him as a means to justify his leaving of his home village.

Ray is the one of a long line of guardians whose passion for Beyblades deemed him worthy to possess and guard over Driger. 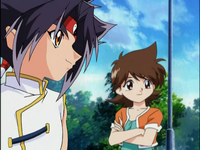