Rock Aries ED145D is a Defense-Type Beyblade that appears in the Beyblade: Metal Masters anime. It is owned by the American DJ and Marcus' friend, Louie. It is classified in the anime as a rare Beyblade by Masamune.

The Facebolt depicts the first astrological sign on the zodiac, Aries and one of the 88 constellation in space ''ARIES'' . It features a Ram's skull, with the word ARIES below. It is featured on a black Facebolt.

Aries was released as a bright pink Energy Ring with three “heads”, which point outwards, hence forming a roughly triangular perimeter on the Spin Track. It was then released in a new color, grey. (If you turn it 180 degrees it will appear like it will have two modes, but only placed on Fusion Wheels with 3/6 "Wings"). The version featured is black.

Rock has six large protrusions with small, shallow gaps between each one. It also overhangs the Track much like the original Leone Fusion Wheel, although to a smaller extent. Rock is currently the third heaviest Hybrid Wheel System Wheel to date. However, as a Defense-Type, it is unable to match the qualities of Fusion Wheels such as Earth and Virgo, because the shape of Rock produces a significant amount of recoil upon contact with another Wheel. As a result, Rock is an outclassed Defense Wheel, but a good Attack Wheel when paired with recoil-reducing parts such as a Metal Face or the tips RF and R2F. Rock also gets loose when used too much. The featured version is black in colour.

ED145 features three “wings” which rotate around the Track freely. The wings are similar to that of WD145. Because of their free-spinning nature, they can be used in Defense customisations, however, the defensive capabilities of this part are not as effective as C145, as it does not absorb hits as successfully. The wings which rotate are hindered without the mechanism of a bearing, hence creating a force of friction in the body of the Track, in turn resulting in less significant damage absorption. Furthermore, it is easy for the low attacker’s Wheel to be caught between the Wheel and ED145, hence causing a lot of recoil and spin reduction to the Defense customization. The free-spinning piece may be removed and interchanged with WA130, creating ED130 and WA145, but this is illegal and not allowed in tournaments.

When hit by an opponent, a Beyblade with this Performance Tip/Bottom will have lessened recoil and will recover from attacks more efficiently than a Sharp Tip. However, while recovering, the Defense Performance Tip/Bottom will cause the Beyblade to lose some Stamina, caused by the added friction. WD has better stamina than D, the friction that added when it brakes make it has little stamina than WD. 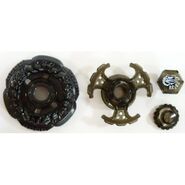 Retrieved from "https://beyblade.fandom.com/wiki/Rock_Aries_ED145D?oldid=371369"
Community content is available under CC-BY-SA unless otherwise noted.