Start a Wiki
Rock Pegasus 105WD is a Defense-Type Beyblade and is a variation of Storm Pegasus 105RF. It is only available in the Sagittario Flame Claw 2-Pack with a recoloured Flame Sagittario C145S.

The Face on this Beyblade depicts Pegasus, one of the 88 constellations in space. This Pegasus Face is brown and black on a dark orange background.

The original release of Storm Pegasus 105RF is a blue translucent plastic wheel. The edges of the Clear Wheel are shaped in a wing-like pattern, each ending in a pointed ‘head’ shape, representing the body form of Pegasus, the symbol its design is influenced by. This Pegasus wheel is opaque and is in a bright orange color.

Rock has six large protrusions with six small gaps between each one. It also overhangs the Track much like the original Leone Fusion Wheel, or its HWS brother, Counter, although to a small extent.

Rock is currently the third heaviest Hybrid Wheel System Wheel to date. However, as a Defense Type, it is unable to match the qualities of Metal Wheels such as Earth and Virgo, because the shape of Rock produces a significant amount of recoil upon contact with another Wheel. Rock is still outclassed in terms of defense, however, Rock does show good use in attack combos such as MF-Rock Bull 100RF.

105 is the fourth lowest Track. It is able to help the bey sneak underneath Defense types and Stamina Types to attack. Although 85, 90 and 100 have been proven to be better options for most Attack types, 105 is still a decent option if the aforementioned Tracks are unavailable.

Wide Defense, as its name implies is the second widest of the “Defense” series of Bottoms after BWD (D, SD, WD, BWD). This brings numerous advantages, but also some disadvantages when compared to the other "Defense" Tips. Because of its massive width that reaches the edge of the Bottom's perimeter, it is able to wobble at a significantly larger angle for a longer period of time than D or SD, and at a much lower spin rate. This can be advantageous in many battles, particularly those between two Stamina types when they are about to topple over; however, if you happen to have a weaker shot than your opponent who is using something such as Virgo DF145SD, WDs low spin rate towards the end of the battle will make it extremely easy for the opponent to knock it completely over but if you launch at a special angle it is impossible for him to knock you over. This low spin rate towards the end of the battle is created because in the process of wobbling at such a large angle, more friction is made with the stadium floor, thus decreasing its Stamina. This is all avoidable however if your shot is at least as powerful as your opponent, as the extra time it is able to spin on an angle will allow you to narrowly outspin your D or SD based opponent. 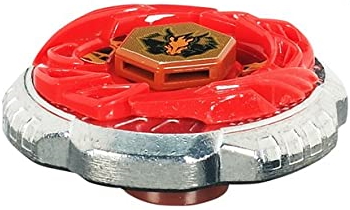 The double pack Rock Pegasus is featured in.
Add a photo to this gallery

Retrieved from "https://beyblade.fandom.com/wiki/Rock_Pegasus_105WD?oldid=345738"
Community content is available under CC-BY-SA unless otherwise noted.