Romero (ロメロ Romero) is a character in the Original Series, consisting of Beyblade: G-Revolution. He is F-Dynasty's coach. His Beyblade is Thorn Rose.

The Radiant Rose attack basically consists rose petals come out of Thorn Rose and start swirling around; then, vines appear from the ground and trap both the opponent and their Beyblade.

Romero is F-Dynasty's coach but is unnamed and only appears in one frame of the manga.

He discovered Raul and Julia Fernandez when they were very young, at the circus. He had most likely already heard of them and of their performances as twins, because he just went up to them and told the two that he could make something good out of them.

Knowing that his two Beybladers worked best as a team, he talked President Dickenson into organizing a tag-team Beybattle. As the World Tournament came to an end, Romero was seen flirting with Judy, which Taro did not take kindly to.

After Kai decided to get back to Beyblading after his first battle against Brooklyn, Romero was the one who helped him control the new Heavy Metal System. Both fought, Romero with Thorn Rose, Kai with Dranzer MS, and at some point his attack had trapped Kai. This forced Kai to come to terms with his thoughts, his intentions. 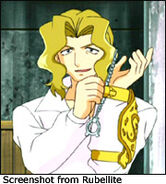 Retrieved from "https://beyblade.fandom.com/wiki/Romero?oldid=406617"
Community content is available under CC-BY-SA unless otherwise noted.