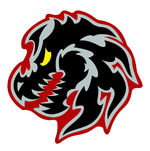 Ronin is a two-sided Element Wheel, with sharp studs on one half and an aggressively curved blade on the other. A slight, smooth slope is created by this blade in Ronin's design. Ronin can be fit on any Warrior Wheel, including Right-Spin ones. If Ronin is placed in Crystal Up Mode, the customization becomes Left-Spin.

When paired with Dragoon and other Warrior Wheels, Ronin can provide some Smash Attack, but like all other Element Wheels it is rendered useless because of its light weight compared to Synchrome combinations.

The Left Wing 160 (LW160) Spin Track is in most aspects identical to Wing 145 (W145), however with the wings facing left. The wings are intended to create down force for stabilization, similar to Down Force 145 (DF145) and Left Wing 105 (LW105). The tall height makes the "wing" protrusions susceptible to attacks from low-attackers, which will destablize the Beyblade. As such, Left Wing 160 finds the most use in Left Spin combinations used against Beyblades with taller Spin Tracks, such as 230.

Blade Semi-Flat (BSF) is a slightly wider variant of the Semi-Flat (SF) Performance Tip, mounted on a base with eight left facing "blades" around its circumference. Like Circle Flat (CF), the blades of Blade Semi-Flat are intended to interact with Zero-G stadiums, to help the Beyblade keep balance. While the blades create a miniscule amount of down force, the effects are negligible. In Zero-G stadiums, combinations using BSF are extremely difficult to knockout and the Peformance Tip has the ability to wobble for extended periods of time and sometimes regain its balance, allowing it to outspin opponents. When used in Left-Spin combinations, it is even harder to sway out of the stadium.

Dragoon against Gryph and Phoenix

Dragoon on the title card

Dragoon's Motif before the title card

Dragoon's Beast about to attack

Dragoon's beast in his battle against Ninja Salamander

Close up of Dragoon and Salamander clashing