Template:ZeroGBeyblade Dark Knight Dragooon LW160BSF [1](Japanese: ダークナイトドラグーンLW160BSF, Dāku Naito Doragūn LW160BSF) is an Attack-Type Beyblade, part of the Metal Fight Beyblade Zero-G series. It also appears in the anime and manga series of the same name, owned by Sakyo Kuroyami. It was released as a Starter on July 21, 2012 in Japan and retail for 円997.

Dragooon depicts a dragon, a legendary creature appearing in various mythologies. Generally, it shows the head of a dragon facing left. The dragon's head is different from how dragons are normally depicted as, because its snout is short; giving it the appearance of a lion or tyrannosaurus. Its mouth is opened with sharp teeth appearing on each jaw. There's also a curved protrusion on its nose and a similar one on top of its head. One eye is shown, in an angered manner designed in solid yellow. Finally, four wavy details appear to the dragon's right. The dragon's head is solid black with silver and red highlighting on a ruby-red Stone Face.

Dragooon is influenced by the mythical dragon and it's shown throughout it. Firstly there is a dragon's head looking left with bright-red eyes, a long snout, with seemingly terrifying teeth. Three are larger than the rest, and protrude to the opposing jaw. A bumped nose is also seen at the top of its jaw. It follows this with its neck curving down with reptillian scales. The dragon's right arm lines down and "holds" the white crystal from its Crystal Wheel; four fingers with four claws. Lastly, its right wing starts with a sharp, but small horn and two gaps for flame-like details.

Because of Dragooon's weight when synchromed, it is notably the first spin stealer that is difficult to knock out by attackers. This makes Dragooon especially broken, defeating most attack types, most stamina types, and most defense types. Dragooon can effectively use it's weight and left spinning prowess in both defensive setups and agressive setups.

Dragooon is a must have Zero-G Chrome Wheel, defeating over 70% of the game. Dragooon's top usage is for spin steal, whether in agressive setups or defensive setups.

Dark Knight is two-sided with both sides greatly differing from the other. One has a mere solid "wall" covering the Crystal Wheel's exterior. Its opposite side has more to offer in terms of design. This time around, many spikes are fit together, circling the Wheel. Two holes are visible, that give off some type of "face." To end it, a gear-shape with spikes compromises the Chrome Wheel. It is quite uneven, both in shape and weight distribution, giving a Stamina type using Dark Knight an awkward spin. It is a clear white in colour.

It retains the purpose of its wings meant to push air down to stabilize the Beyblade during spin.

Blade Semi Flat (BSF) is a variant of the Semi-Flat (SF) Bottom. Its gimmick is that eight rims of "blades" appear out of the Bottom's exterior. They're meant to help the Beyblade keep its balance and use its blades as a "double-contact" in a similar manner to Circle Flat (CF.) It is a varsity red.

Dark Knight Dragooon is based on the legendary creature, the dragon. Dragons are very popular and as such, have appeared in many different mythologies and stories, i.e. European and Asian. The most well-known ones were European and Chinese dragons. Today, dragons are known as winged creatures with serpentine and reptilian-like traits incorporated into their design. They are seen in much of media as well as stories and much more.

The term "Dark Knight" can refer to either one of two meanings. One would be the popular, Batman who is known as "The Dark Knight" because as a symbol, he is the modern-day knight who fights as a vigilante and for the greater good of humanity; especially if it means working against the authorities.

The other meaning and the most probable, is the black knight. The black knight is a character appearing in various stories, mostly from Arthurian literature who is the counterpart of a white knight. As such, the black knight could sometimes be affiliated with death or at least something considered dark or of an evil nature.

Dragooon is derived from dragon; though more as a nod to the popular Original series series of Beyblades: Dragoon. Like Dark Knight Dragooon, the original Dragoon was based on a dragon; specifically, the Azure Dragon of the East, one of the Four Symbols of the Chinese constellations. It was called "Qinglong" in Chinese and for Japanese, "Seiryū." 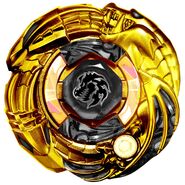 Dragooon against Gryph and Phoenic.

Dragooon on the title card.

Dragooon's Motif before the title card.

Dragooon's Beast about to attack.

Dragooon's beast in his battle against Shinobi Saramanda

close up of Dragooon and Saramanda clashing 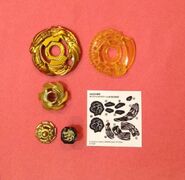 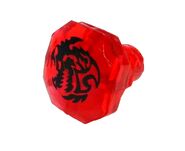 Dark Knight Dragooon pieces
Add a photo to this gallery