The Saint Shields (セント・シールズ Sento Shīruzu) are a team featured in the Original Series, consisting of Beyblade: V-Force.

Their team is made up of a dedicated group whose goal is to gather up and seal all Sacred Spirits (Bit-Beast). They were aware of the awakening of the 4 Sacred Spirits of Dragoon, Driger, Dranzer, and Draciel and realized the potentially destructive potential of the 4. In the past their family had fought and almost captured the 4 only for them to escape, the legacy of capturing them fell to the current members.

Eventually, the 4 allowed the Bladebreakers to keep their Bit-Beasts, believing the 4 were good guardians to the 4 sacred spirits.

Ozuma was the first to appear, in the very first episode, disguised as a hooded figured named "Mr. X". He defeated Tyson in a local championship, surprising the audience and Tyson himself. Joseph and Mariam were the next ones, defeating Ray and Max respectively. Dunga was the last to show up. He challenged Kai, who had given up beyblading due to the lack of good bladers to fight with. Both fought on top of a building, and the game ended as a draw. Throughout the first half of the season, they would appear occasionally to challenge the Bladebreakers for small fights. Each of the Bladebreakers had a chance to battle with his opponent on the Saint Shields team again, and the result was almost exactly the same: Ray and Max were defeated, Kai and Dunga had a draw. However, Ozuma had challenged Tyson to a battle inside some sort of storage building, and Tyson was able to defeat Ozuma with the Victory Tornado Attack.

In the very half of the season (end of the last episode from the first half), after the battle between the Bladebreakers and the Cyber Bit-Beasts. Ozuma surprised all the bladers by saying: "One day, your bit-beasts will be ours!". It is later revealed that the Bit-beasts are sacred good spirits that the evil men used for their own wills. Saint Shields raised as a clan whose mission is to capture and seal the four-bit beasts so that nobody can use their power to destroy the world. Dunga battles Ray soon after telling the bladers his story, and he manages to steal Driger.

Some days after, Saint Shields challenge the Blade Breakers for the ultimate battle, on an abandoned amusement park. Every Saint Shield is defeated, except for Ozuma, whose fight with Tyson ends in a draw, after another conversation between Tyson and Dragoon. Saint Shields then realize that the sacred Bit-Beasts are in good hands and decide to give the bladers a break.

They come back days after, to take part in the World Championship. They divide themselves into two pairs: Ozuma & Dunga, Mariam & Joseph. Ozuma and Dunga open the championship, facing Zeo and Gordo. Gordo easily defeats Dunga, but Zeo faces some difficulties when fighting Ozuma. After Zeo reveals his new Bit-Beast, Cerberus, he unleashes a devastating attack on Ozuma, who struggles to stay in the game in order to protect the Bit-Beasts. However, he doesn’t make it.

Joseph and Mariam then engage on a 2x2 battle against, King & Queen. As the latter is used to fighting like a couple, they make it destroy Sharkrash and Vanishing Moot. It was the end of the participation of the Saint Shields on the World Championship. They would later appear only among the audience.

The history of the Saint Shields

Over ten thousand years ago, the sacred powers were the source of all the blessings and blessings of the people on the planet. When the land droughted, it was the holy forces that brought in the shortest time clouds filled with rain. Panting with moisture, the withered earth drank the water, quenching its thirst and thanking it with its abundant gifts. Thanks to the Holy Powers, life on earth was like paradise and people lacked nothing.

They respected and feared the holy powers and the power that emanated from them. But there were bad people who seek to control the powers and use them for their own purposes. The powers were destroyed and everything seemed lost. But the ancestors of Saint Shields discovered a way to banish the holy powers. They searched the land to find the ground of destruction and enclose it in a rock.

The evil Brotherhood, whose own sacred powers were enshrined by the people of Saint Shields, vowed revenge. They wanted to use the 4 strongest powers that governed nature:

United would be this power invincible, the people of Saint Shields tried to catch these 4 powers to prevent this. They called upon the powers of the stone to defend themselves. But they were helpless against the strength of the four united powers. Then the 4 disappeared and were never seen again. The ancestors passed on this knowledge and waited on the day of the return of these powers. For thousands of years, the tribe of Saint Shields has kept watch. 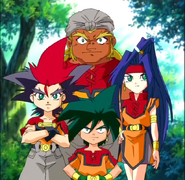 Retrieved from "https://beyblade.fandom.com/wiki/Saint_Shields?oldid=438423"
Community content is available under CC-BY-SA unless otherwise noted.