Salima (サリマ Sarima) is a character in the Original Series, consisting of Beyblade: V-Force. She is a former member of Team Psykick. Her Bit-Beast and Beyblade was Cyber Driger.

Salima has spiky red hair that is similar to Max Tate's except longer, she also has dark-purple eyes. Her basic attire is a black jacket and purple undershirt, she also wears a white skirt with a red belt, black stockings and purple shoes with black laces. In her first appearance she was not wearing her black jacket and instead of her stockings she wore socks.

She starts to wear the Team Psykick uniform, after joining the team.

She is very kind-hearted and truly believes in her team's goal: to learn everything they possibly can about Beyblading. She also cares about other people as she told ray to forfeit the match to save his bit beast and not just for a free win. This was also shown when instead of battling more she decided to travel the world and teach kids about bey blading. Salima was also one of the members of her team who did not want to cheat, which shows that she is a fair player and has a sense of honor.

Salima comes with her group in the airport, where at the entrance she came to help two kids who were beyblading, but one of their beyblades was about to get crushed by a bus. She gave them back their bey and told them to take care of their beys and play some where safe.

Salima was also seen along with Kane when the blade breakers tried to sneak into the Psykicks' head quarters and training facility. Salima is the Beyblader chosen to use Cyber Driger. She, along with Kane, was originally against the idea of using the Cyber bit-beasts and tried to convince her teammates that using digital holy beasts was a bad idea. She even wanted to help Ray and the Bladebreakers by giving them her Cyber holy beast to analyze, but demanded in return that they forfeit the match to keep Driger safe.

However, during her attempt to steal Cyber Driger, Kane stopped her and told her that making the blade breakers forfeit the match is a bad idea and told Salima that she should be doing the opposite and should try to use the cyber bey without summoning the bit beast. Later during a training match doctor B puts her against Kane so that she may become possessed by Cyber Driger. During the match she tried to play fairly and not summon Cyber Driger but she accidentally summons it. After the battle she becomes possessed by the bit beast’s power and wants to battle more with it.

During her match with Ray, she still displayed traits of her old self: the desire to win a match without cheating. During the match she tried to regain control and play fairly. She showed the desire to battle fairly when she destroyed doctor B’s fans. During the battle she was badly injured and harmed when cyber Driger was using too much of Salima’s power and was about to kill her. Ray managed to break through to her when he won. Ray tried to make her come with him but she was ready to accept her fate which was to be punished by Gideon and she was also ashamed that she was controlled by the cyber bit beast but she did thank Ray for all his help. After that she was locked in a cell for her failure. Also when the Kane was battling Tyson he was going beyond his limit and could hurt himself. To stop him Salima ran to give him some advice but Kane used his cyber dragoon to blow her away which made Tyson really angry.

After Kane and Tyson’s battle the entire battle tower was about to collapse. While everyone was trying to get out Salima was helped to walk by Ray and Max because she was injured in her own battle and later by Kane when he lost control. After everyone got out she was very sorry for using cyber bit beasts and told every one what beyblading was really about. After her talk, Tyson agreed with her which enabled Hilary to tease Tyson that he was in love with Salima which is not true, as she loves Kane.

During the later part of this season, she makes a cameo along with Goki. They both are shown teaching children how to beybattle. According to Kane, they both were at Timbuktu (in Mali) at last. They didn't join Kane and Jim for the World Championships. In the Japanese dub, Kane mentioned that they were in Canada (her hometown).

In the manga, she and her friends don't have any relationship with Tyson and the others. She is directly introduced as a member of team Psykick. She took part in a three-on-three battle where She, Goki and Jim, fought Ray, Kai and Jim respectively and meanwhile Kane and Tyson fought separately. Like in the anime, she was defeated along with Goki and Jim.

Later, she was seen with Kane witnessing the battle between Tyson and Kai in the world championships.

The power half hour!

She cares for her little brother and teaches him how to Beyblade. But that was never seen or mentioned. Although in episode 43, she and Goki were teaching Beyblade skills to kids. It is most likely her brother was among them.

Tyson and Salima haven’t really interacted much at all, but Salima’s sense of friendship seems to affect Takao greatly. It is because of a possessed Kane using Cyber-Dragoon to hurt Salima, a friend who was only trying to help him, that Takao realizes that Kane is not the same honorable Blader he met before, and decides to do all that he can to put an end to their fight. After escaping from Gideon's battle tower, Tyson seemed to have admired Salima's speech which led Hilary and Kenny to tease him by saying that Tyson has a crush on her.

They seem to be great friends and rivals, she shares lots of thoughts with him and was even prepared to give him Cyber Driger to end her teams madness. Ray also cares about Salima as he always tries to help her when something is wrong. She was also worried about Ray and his bey as she did not want anything bad to happen to him. He was hugely influenced by her when she tried to stop the battle between Kane and Tyson.

Salima has traveled with Kane for over a year and also seems to have romantic feelings for him.She is always worried about him and is always on his side when it comes to opinions. Salima always trusts Kane and did not even get mad on him when he used his bit beast to knock her away. She is more closer to Kane than Goki or Jim and their friendship is the closest which Salima has. They talk to each other about their problems, finding common ground, solutions and understanding each other. Whenever the four of them are seen together, Salima is seen next to Kane.

Goki once got angry with her regarding the opinions of using Cyber bit-beasts. After the events of the cyber bit beasts she and Goki parted ways with Kane and Jim to teach kids around the world about beyblades and learn more about life. She joins Goki for travelling while Kane and Jim went for the World Championships.

He is Salima's teammate. Being the first person to get controlled by the Cyber Bit-beasts, he becomes angry at Salima and others for not supporting him on his opinion.

In the 27th episode of the V-Force season, there is a small clip where it is shown that Hilary was having Salima with her as she was affected by Kane's Cyber Dragoon. She too asked Kane for the absence of Goki and Salima after Kane and Jim returned for the World Championships.

Salima: "Look what it's done to you!" (about Cyber Dragoon) 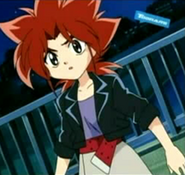 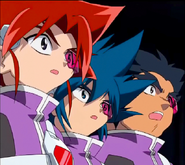 Salima is blown away by kane

Salima controlled by her bey

Salima during the Championship Arc

Retrieved from "https://beyblade.fandom.com/wiki/Salima?oldid=423286"
Community content is available under CC-BY-SA unless otherwise noted.