Samurai Ifrit W145CF or Samurai Ifraid W145CF (サムライイフレイドW145CF, Samurai Ifureido W145CF) is a Fire Element Attack Type Beyblade that appears in the anime and manga series Beyblade: Shogun Steel. It is owned by Zyro Kurogane. It was released as a Starter (BBG-01) on March 31, 2012 in Japan, and later in western countries as a Starter Pack (SS-01). 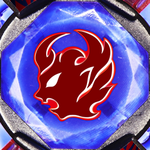 Samurai is an Element Wheel that features a circular design, with some cuts and gaps throughout. Samurai features various square-like designs throughout the Element Wheel, and has a crystal that fits into a Warrior Wheel. Samurai is promoted by Takara Tomy as a top-tier Attack Type Element Wheel, but is surprisingly balanced, offering pound attack while also having defensive power. In addition, Samurai has found use in Attack Type combinations that include the Ifrit Warrior Wheel.

Wing 145 (W145) is the first brand new Spin Track of the Beyblade: Shogun Steel toyline. Similar to Wing 105 (W105), Wing 145 has six "wings", or in this case "blades", circling around the Spin Track. These curve upwards with gaps between each individual blade, pushing air downwards, creating down force to stabilize the Bey, similar to Down Force 145 (DF145).

Circle Flat (CF) is the first new Performance Tip of the Beyblade: Shogun Steel toyline. Circle Flat is designed to work in the Zero-G stadiums and their swaying gimmick, and as such includes a large circular ring. The large ring grips the sides of the stadium, so it can go higher and shake the stadium. The ring features six circular designs. The size of the flat tip is the same as Wide Flat (WF).

With the Mobile Beystadium

Recolor in the Fire Team Set