Samurai Pegasus W105R2F or Samurai Pegasis W105R²F (サムライペガシスW105R²F, Samurai Pegashisu W105R²F) is a God Element Attack Type Beyblade that appears in the anime and manga series Beyblade: Shogun Steel. It is Gingka Hagane's fifth Beyblade in the manga, and the fourth in the anime, replacing Cosmic Pegasus F:D. It was released as a Starter (BBG-26) on December 1, 2012 in Japan, and later in western countries as a Starter Pack (SS-26) in March 2014. 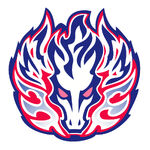 The Pegasus Shogun Face Bolt depicts "Pegasus", the magical winged horse that soared into the heavens for the Greek god, Zeus. Pegasus is one of the 88 constellations in space. Following the trend that began with Pegasus I, it depicts a modified Pegasus motif based on its predecessors. Pegasus has undergone a redesign, featuring a longer snout with the lightning theme now replaced with flames.

As with all Shogun Face Bolts, the Hasbro release of Pegasus is cross-shaped rather than the round diamond shape of its Takara Tomy Stone Face counterpart.

Samurai is an Element Wheel that features a circular design, with some cuts and gaps throughout. Samurai features various square-like designs throughout the Element Wheel, and has a crystal that fits into a Warrior Wheel. Samurai is promoted by Takara Tomy as a top-tier Attack Type Element Wheel, but is surprisingly balanced, offering pound attack while also having defensive power. In addition, Samurai has found use in Attack Type combinations that include the Ifrit Warrior Wheel.

Wing 105 (W105) is an upgraded version of 105 with "wings" resembling fins, at its sides, replacing 105's handle-bar protrusions. The wings are meant to push air upwards similar to DF145, in order to provide additional Stamina to the Bey. However, the effect is barely noticeable and performs just like an average 105. Wing 105 also weighs slightly more than 105, providing slightly better Defense.

Right Rubber Flat (R²F/R2F) is an upgraded version of Rubber Flat (RF). While retaining the same basic appearance, the Performance Tip, instead of being flat, features six curves going in a right-ward motion, giving it a star-like shape. This provides the Beyblade with fast and much more aggressive movement and speed than that of RF. This is due to the added friction that is created as a result. However there is a downside; despite its fast movement, it has low Stamina, much lower than that of RF. When first used, Right Rubber Flat will be too fast and hard to control, so it is recommended that a Blader wears it down with a few practice battles for it to become more controllable.