This Beyblade was released as a lottery prize during the "Zero-G Series Release Commemorative Campaign 1". By purchasing products at WBBA stores between April 14, 2012 to May 18, 2012, Bladers could enter to win one of the 1000 produced. Like other lottery prizes, this Beyblade was later released in Hong Kong by Mani Limited. 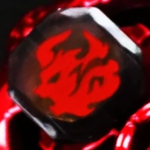 The Saramanda Ifraid Shogun Face Bolt is an amalgamation of the Ifraid and Saramanda Shogun Face Bolt designs, and is intended to represent their Synchrome motif. The design is primarily based on Ifraid's, with elements of Saramanda incorporated into it.

Extreme Flat (XF) is the second widest "Flat" Peformance Tip currently available, the first being Giga Flat (GF). Due to its wide surface, Extreme Flat has fast and aggressive movement, similar to Right Rubber Flat (R2F). However, as it is made of plastic rather than rubber, it has greater stamina and not as much grip. Extreme Flat is overall a superb Attack Type Performance Tip, and when combined with a low track such as 85, which it is often paired with, it makes a powerful low attacker combo.