This Spirit Axle represents Hercules, the son of the god Zeus. Hercules was known to be very strong and muscular. He had a wooden bat as his weapon. (see Cyclone Herculeo 105F for more info)

The energy core has three of the same faces of Hercules inside. The Energy Core is lighter than other Power cores, giving it the highest speed of all power cores. Even with the weight, it has multiple uses in Race battles and Crash battles as well.

It is probably the smallest attack gear ever. It is able to give good power and speed for an attack gear. 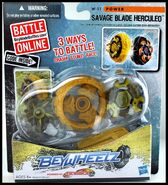 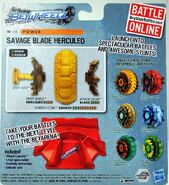 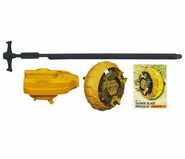 Add a photo to this gallery
Retrieved from "https://beyblade.fandom.com/wiki/Savage_Blade_Herculeo?oldid=304464"
Community content is available under CC-BY-SA unless otherwise noted.