Señor Hanami, known as Señor Anami (セニョール・アナミー, Senyōru Anamī) in Japan, is a character appearing in the anime series, Beyblade Burst Evolution. He is an announcer who is a member of the WBBA, and attends every official battle.

Similar to his Japanese counterpart, Señor Hanami is a sharply dressed man with blonde hair and green eyes. He wears a blue suit with a red bowtie and a green and white shirt underneath. He has a similar appearance to Hanami.

Señor Hanami is very lively and loves watching Beyblade battles. He cares a lot about the game and the results of each battle. He will sometimes add extra comments of his own about the battles. 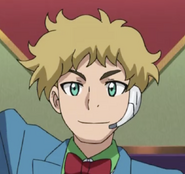