Sea Dragon (シードラゴン, Shii Doragon) is a Defense-type Beyblade implementing the Hard Metal System. It was first released in Japan as the prize Beyblade in the HMS Random Booster Act 2. Hasbro later released it as Sea Drake.

Seagon Attacker is one of the most unusual AR designs ever. The metal frame lays on top of the ABS Caul, the inverse of what all other HMS AR designs have. Going around the edge are metal walls with three bumps on each side to assist in deflecting attacks. In left spin, Seagon Attacker has two hammer heads that have incredibly strong Smash Attack that can often stop the opposing Beyblade in one hit if they make contact. However, the recoil is so high that most hits usually result in the Beyblade using Seagon Attacker to either stop or self-KO. For this reason, Seagon Attacker is generally not utilized.

While not the best choice, you can build a Smash Attack combo using Seagon Attacker.

Use in Survival Customization

You can use Seagon Attacker to add Defense and Attack to your Survival-type combo.

CWD Defense Ring is the most important part of this Beyblade. It is the heaviest and most compact CWD available, not to mention it is fixed. This CWD is used to add weight to most Beyblades, resulting in controllability, higher spin velocity, higher Defense, and many other attributes.

Another important note is that the Takara version of this Beyblade comes from HMS Random Booster Act 2, which comes with a 17g metal piece for CWDs. The normal weight of these is 15g. This 2g difference adds a significant portion of weight to any Beyblade.

This CWD became popular for heavy Upper Attack Beyblades. This is the most common style of customization.

You can use this CWD to add weight and spin velocity to your Defense combo.

Metal Ball Core is a rather tall RC with a free-spinning metal ball at the base of it, with a small chamber of grease that coats it. Because the ball moves independently from the rest of the Beyblade, recoil is lessened when it is hit back in battle.

There are several other RCs available for Defense-types:

With this in mind, it is hard to find a place for Metal Ball Core in the spectrum. Still, it does have some use for Defense customization.

You can use Metal Ball Core to build a Defense combo. 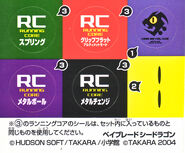 Sea Dragon sticker sheet
Add a photo to this gallery

Seagon Attacker and Metal Ball Core are negligible as parts. However, CWD Defense Ring is not negligible; it is one of the most basic parts for customizing with HMS. Combine this with the 17g metal piece for the CWD, and it becomes a must-have item.

Retrieved from "https://beyblade.fandom.com/wiki/Sea_Drake?oldid=315430"
Community content is available under CC-BY-SA unless otherwise noted.