Note: Since this article was published, significant new and more accurate information has come to light, and as a result, this article must be updated. Please do not take all of the information here as the truth, as more extensive testing on the parts of this Beyblade has since provided information which conflicts with and/or expands upon the understanding of these parts this article was based upon. Updates will be posted on the main page when completed.

Whale Crusher is useful for Smash Attack as it has a very wide attack range. In left spin, Whale Crusher has the ability to perform Smash attack. Eight Spiker is generally a better choice, but Whale Crusher's weight and size may prove more suitable to your strategy, as its larger diameter gives it a higher chance of making contact. Whale Crusher in right spin can be used in Defense type customizations and has a slight amount of Upper Attack. The Survival of this AR is generally considered to be too low to be used properly in a Defensive customization and Smash Turtle is usually preferred.

Use in OHKO Customisation

This style of attack is very risky as it generally has to win very quickly or it will just spin out, however the Metal Flat Tip allows it to spin a little longer than if Storm Grip Base were used.

This is often considered the successor of the Flat Blade Base. The flat tip allows for high movement speed, while the low height allows for effective Upper Attack. 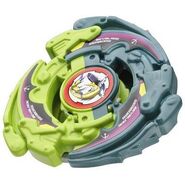 Seaborg 2 Hyperblades Ver.
Add a photo to this gallery

Sticker sheet
Add a photo to this gallery

While Whale Crusher's solid Upper Attack ability is a nice touch, the fact is that it is too aggressive to be used for Spin Stealing Upper Attack (the only competitive Upper Attack-based type aside from Driger V2 combinations, which inherently only use Upper Claw as their Attack Ring) yet not powerful enough to be an effective choice for Smash Attack in either spin direction leaves Seaborg 2 without any truly competitive parts. Unless one is desperate, this Beyblade is only worth buying for collection purposes.

Retrieved from "https://beyblade.fandom.com/wiki/Seaborg_2?oldid=421486"
Community content is available under CC-BY-SA unless otherwise noted.