Shadow Driger was one of the first 5 layer system beyblades released by Takara. However it wasn't released by Hasbro until late in the G-Revolution series like others more likely because it wasn't a very influential release. The Takara release has no box and is stored in a bag like a lot of the early releases.

The bit is the "Shadow" version of Driger.

As the name suggests, Star Shape is in the shape of a star. It is one of the smallest ARs ever made. There is no competitive uses for Star Shape, except on WD Attackcustomizations, which are essentially useless in competitive play as well.

Use in WD Attack Customization

Star Shape's only possible use is in WD Attacking customs.

The Balance series of Weight Disks has three different versions that were updated as newer Beyblades were released. Chronologically, the first Balance WD to be released was Six Balance, followed by Eight Balance, and finally Ten Balance. The number before the word “Balance” on each WD represents the number of sides on each WD (ex. Eight Balance would have eight sides, making in into an octagon shape).

Blade Base: SG Sharp Base

This is often considered the successor of the Sharp BB.The pointed tip allows for very little friction between the Beyblade and the Stadium surface which helps maintain high spin velocity. This offers very little movement and as such offers no Attack potential. This part is also often thrown off balance and can be easily toppled over. This in turn sacrifices all Defence ability. While this can be used as an advantage in some situations, there are far better choices than this part for Survival types.

Note: This SG Sharp is different than other SG Sharp models. It has clips that extend far enough to make the outside of the SG Sharp base a perfect circle.

The beyblade was released in several of the early random boosters. These are incredibly rare however. 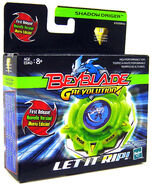 This beyblade due to it's early release is very hard to find even used but pops up from time to time on sites such as the US Ebay.

Retrieved from "https://beyblade.fandom.com/wiki/Shadow_Driger?oldid=335836"
Community content is available under CC-BY-SA unless otherwise noted.