Slash Riger MS is an Attack-type Beyblade implementing the Hard Metal System. It is part of the Gimmick Specialty Series. It was released as part of a random package, Beyblade Fukubako (Lucky Box) 2005.

The Bit-Protecter for it is the Riger Emblem. It is a third gen mold bit-protector.

Compared to Samurai Upper and Circle Upper, Slash Upper's attack range is in fact, smaller, but this should not be a detriment to its performance, especially in small stadiums like Tornado Balance Type S. However, one factor which could be considered a disadvantage in certain situations is its light weight compared to the other staple Attack based ARs. Two of the best ARs in the HMS series, Jiraiya Blade and Samurai Upper are both heavier by approximately four grams. Unless you are making a purely Smash Attack based custom, where weight is not of huge importance, generally, it would be a better idea to choose a heavier AR than Slash Upper. That being said, Slash Upper's versatility should also be considered when deciding on whether or not to use it.

Slash Upper can be used to great effect in any Upper Attack based custom, with added Smash Attack.

CWD Free Crusher has a wide attack range, bigger than any other HMS AR or CWD. Its wide attack range can be attributed to the six sharp spikes surrounding its perimeter. CWD Free Crusher's intended purpose is to use its blunt spikes to Smash Attack the opposing Beyblade. However, because it is free-spinning it does more damage to the Beyblade it is being used on rather than the opponenet's own. The fact that it is moving means that the attack points will always be moving when hitting the opposing Beyblade and will never make a severe enough blow. If it had been a fixed CWD rather than free-spinning, the Smash Attack would have been brutal, likely with extreme recoil. This CWD is not viable for any competitive situation, aside from one specialized customization, outlined below.

There is an interesting trick you can perform with this RC. CWD Free Crusher is generally free-spinning so it cannot do any damage. However, by combining it with Samurai Changer MS's Battle Change Core, the CWD plastic part of Battle Change Core will prevent the CWD Free Crusher from spinning. This combo has very high Smash Attack, but also has high recoil. If it doesn't finish the battle almost immediately, it has very little chance to win.

Free Wing Core is a Running Core released as part of the Hard Metal System. It debuted with the release of Slash Riger MS.

Free Wing Core has two gimmicks. It has three foldable claws which hang down while not spinning, and float up due to inertia while spinning. Similar to CWD Free Crusher, Free Wing Core's claws also spin freely. These claws will more often than not, make next to no contact with the opposing Beyblade due to the massive height of the RC (to allow for the claws to hang down), which also makes it quite easy to knock off balance. Even if the claws somehow manage to make contact, they will only perform in a similarly ineffective way as CWD Free Crusher's spikes do. Free Wing Core has no use whatsoever. </onlyinclude 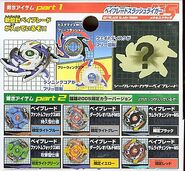 Riger Emblem
Add a photo to this gallery 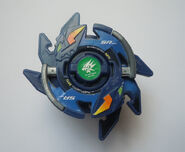 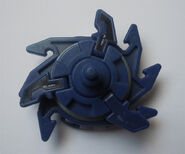 Slash Riger MS, while it does have a very aesthetically pleasing design, contains a number of useless parts in its CWD and RC. What makes this Beyblade a worthy addition to any Bladers collection however is its third mold BP, Riger Emblem. The third mold Bit Protectors were only released in five different HMS Beyblades. More important than this is its AR, Slash Upper. Slash Upper is a versatile AR which employs the use of Smash and Upper Attack at the same time to an effective degree. Slash Upper alone makes Slash Riger MS a great buy for any Beyblader looking to get away from the staple Upper and Smash ARs such as Samurai Upper and Jiraiya Blade.

Retrieved from "https://beyblade.fandom.com/wiki/Slash_Liger_MS?oldid=420706"
Community content is available under CC-BY-SA unless otherwise noted.