The Spirit Axle has a motif of Perseus.

The Spirit Shield is bronze with maroon. despite this bey being a speed type, destroyer is actually a very heavy power type shield. it has the slightest resemblance to the Scorpio energy ring.

Slash is a very thin core making it one the fastest energy cores. The original Slash core is navy blue in color. It has small gaps in it for better traction. Though Slash has amazing speed it lacks power. it is the second lightest of all cores. The first being Toxic.

The warrior attack gear is best described by Jin as being a "Super tough shield." Warrior does resemble a shield and also seems to depict a Roman or Greek helmet. like destroyer it is a vary heavy power type gear. Although it resembles a shield, it has good offense as it can cause high damage. 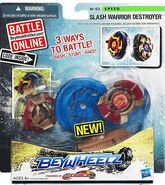 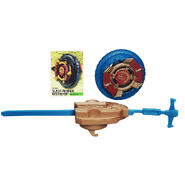 Add a photo to this gallery
Retrieved from "https://beyblade.fandom.com/wiki/Slash_Warrior_Destroyer?oldid=423487"
Community content is available under CC-BY-SA unless otherwise noted.