Soaring Wing Pegasus is a Speed-Type BeyWheel, part of the 2012 BeyWheelz toyline. It appears in the anime, BeyWheelz with its owner, Sho Tenma. It was released in June 2012 in North America, and is based on the Pegasus series of Beyblades.

It has a Spirit Axle which depicts a Pegasus facing left with its head down and its right wing raised. Also, the head's seen with hair traveling down to its neck, with a pointed ear. Outlined in black, the whole face is red.

Its Spirit Shield is two-sided with a stylized, skinny wing of a Pegasus and jagged red spikes on them. The wing is blue with a red highlight and the spikes are also red.

Its Energy Core is grey and made up of many points, edges, and cuts; probably to represent battle scars. The core's interior also harbors an eccentric design, with many circles, gaps, and three wings. It's the 2nd fastest core with slash being first. It can win races easily. 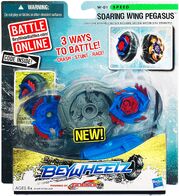 Add a photo to this gallery
Retrieved from "https://beyblade.fandom.com/wiki/Soaring_Wing_Pegasus?oldid=420945"
Community content is available under CC-BY-SA unless otherwise noted.