"Special Move" (必殺技 (ひっさつわざ), Hissatsu Waza; Finishing Move) is a term referring to the various named attacks and skills featured in the Beyblade franchise. This concept was first introduced in the "Bakuten Shoot Beyblade" manga and has become a recurrent element in every franchise and series to date.

The defining traits of characters are highlighted in their special moves. Many characters have a unique attack(s), in addition to a set of supporting abilities common to all characters. In the basic sense, special moves are the sensational techniques, abilities, and skills depicted in the series and is frequently used by various characters.

The concept was first introduced in 1999 with the "Bakuten Shoot Beyblade" manga, using the term "Hissatsu Waza" as the definitive term to classify the spectacular techniques depicted throughout the books, as well as the anime adaption.

This term would be translated and re-interpreted in many ways when the series properties were released internationally. The Nelvana media company who had acquired the license for the anime would change the term "hissatsu waza" to "Attack" for the English adaption. VIZ Media, on the other hand, would acquire the license to the manga and would use terms like "Super Move" and "Superattack" interchangeably, during the series publication.

When the franchise was revived in 2008, with the Metal Fight Beyblade manga and anime series franchise, the concept of the special move was revamped as Hissatsu Tengi, which implemented new elements to the concept. When the manga was released in English, they were relabeled as special moves.

When the franchise returned in 2015 under with the Beyblade Burst, special moves returned, but in a more grounded interpretation. This version of special moves emphasized the Beyblade's unique gimmicks and parts as well as the expertise of the BeyBlader. Although they do exist, they are not expressly referred to using a particular term.

While each franchise has their own interpretation of the special move, they generally follow the same basic concept of being signature moves using a Beyblade that are executed in the heat of battle against their opposition. As the name suggests, special moves are dedicated abilities with wildly different functions, outside of the "normal" actions that a Beyblade is usually capable of. Special moves vary depending on numerous factors (i.e. the Beyblader's skill, Beyblade combo, Launcher set-up, Stadiums, etc.), and can have an assortment of effects ranging from simple functions, such as heightened damage and spin stealing, to supernatural phenomena. In many cases, special moves provide more tactical advantages compared to normal Beyblade actions and do more damage overall, although this differs between every special move.

Special Moves in the "Original series"

In the English publication of the manga "Beyblade", special moves are commonly referred to as "Super Moves" and "Superattacks" while in the anime adaption, they are referred to (albeit vaguely) as simply "Attacks". These are spectacular maneuvers that usually require the power of supernatural entities called Bit-Beast, which may inhabit a Beyblade's Bit Chip.

Characters of this series usually have complete command over their special moves and can active them at will. In the manga, characters showed a capacity for creating special moves on their own as the story progressed, acquiring newer and categorically more powerful moves as a result of gaining more advanced Beyblades (i.e. Kai Hiwatari invents the "Flame Saber" after upgrading his Dranzer S to Dranzer F) or as the bond with their Bit-Beast deepened. The anime adapted much of these elements, but the manga and anime makes a clear distinction in how special moves are depicted and function:

Visually, the two media continue to differ as the manga used vivid, dynamic action to highlight the technical skill of special moves while the anime used the creative concept of activating special moves as Bit-Beasts emerged from glowing portals created by their Beyblade's Bit Chip. For the anime, this was the series attraction until the final season (Beyblade: G-Revolution) where special moves became the anime's highlight, being presented in a similar dynamic fashion much like the anime.

Special Moves in the "Metal series"

Also introduced in the Metal Saga is a dedicated power scaling system in the form of Bey Battle Points (ベイバトルポイント, Bei Batoru Pointo) (or BBP) which measures a Blader's average combat power. According to dialogue in the manga series, 1 BBP is the equivalent of one average Blader. Bladers can accumulate additional points by defeating other Bladers, with each victory increasing that Blader's point value in portion to the amount of BBP of their opponent. Bladers utilize Beypointers and Beypoint Cards to track their points and progress.

As an indicator of a Blader's combat strength, Bladers with large amounts of "BBP" can alter the properties and characteristics of their Beyblade's special moves by enhancing them with BBP. To give a perceptive, at the height of his power, Rago possessed a BBP value of 100,000,000 (1億, 1 oku). During the manga's climax, Rago prepared his "Last Armageddon" attack by infusing his gargantuan pool of BBP into his Diablo Nemesis X:D. According to exposition from characters, that much BBP would create an attack that could obliterate the planet. This threat required the collective BBP of every Blader on the planet just to strengthen Ginkga to a level powerful enough to counter the attack with his Ultimate Spin Move, the Cosmic Nova.

In the current series, "Beyblade Burst", special moves, as they were presented, have no particular label and have been described using many terms. Though the anime and manga never definitively used an official term, the Hasbro "Beyblade Burst" game app has referred to special moves in that game as "Bey Techniques" and "Avatar/Spirit Attacks". But it should be noted that the manga has used the term "Finishing Shoot" (シュート, Hissatsu Shūto) on occasion [1][2] and more frequently the term "Hissatsu" (, Finisher) preceding a move's name. Nevertheless, this franchise differentiates itself from the traditions of the previous franchises by emphasizing the game's more technical aspects (e.g. shooting form, stance, targeting, characteristics and condition of parts, strategy, etc.) as characters handle their Beyblade and Launcher.


In the Japanese serialization of the manga series, the story introduced a new plot element called

Resonance (, kyōmei) which is a metaphysical phenomenon that occurs from the camaraderie between a Beyblader and the Bey's avatar spirit.


Resonance became more prevalent as the series progressed and became an essential element in terms of how special moves are presented in this series (more specifically the anime). During Resonance, a Blader's emotional intensity generates an intense, colored aura that erupts and flares throughout their body. In this state, the Blader's Bey becomes super-charged with power and glows in proportion to the intensity of their wielder's emotions and willpower. In particular situations, an avatar can come to possess the wielder and alter their personality to reflect their own. In instances such as this, the spirit can even become visible to another Blader of sufficient, or rivaling, power.[3] In the "Cho-Z" series, the series' protagonist Aiger Akabane possesses the Devil's Resonance (の), which a form of Resonance generated by his dark desires.

While officially unconfirmed, Special Moves can be divided into 4 basic categories: Boost, Parts, BeySpirit, and Combination.

Boosts (called a "shot" (ショット, shotto) in the Japanese dub) specializes in launching a Beyblade into a stadium using a particular technique. Boosts can be done using any Launcher and generally make Beyblade attacks stronger, improves their mobility, and spin duration. Specialized Boosts tailored to a Beyblade's characteristics and tendencies can increase their overall effectiveness, interaction with the stadium floor.

BeySpirit Special Moves require a spirit/avatar or the Beyblader's individual spirit to activate. These special moves are dynamic, mystical techniques that award the Bey different powers and abilities when a spirit is summoned and each franchise has their own gimmick and mechanism for summoning them:

Combination Special Moves refer to any special move featuring two or more Beybladers combining their efforts in a coordinated assault. These moves generally produce entirely different moves by using either an original sequence of movements or a combination of two or more special moves. 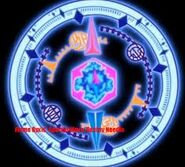