Stalking Hunter Wolf is a Balance-Type BeyWheelz from the BeyWheelz toyline. It is based on the Wolf series of Beyblades, specifically Dark Wolf DF145FS. It was released as part of the Spark FX series.

Wolf is a light orange Spirit Axle. As Stalking Hunter Wolf is part of Spark FX, it uses a holographic Spirit Axle. The sticker gives off a shiny chrome-like appearance. The motif used is a green outline of a styilzed wolf head.

Wolf is a lime green Spirit Shield. It is similar in shape to the Bull Spirit Shield with their four sections of spikes (two sections per side). These however are designed as all four of a wolf's paws; four claws for each section with sixteen in total. They are quite large and thorny. Between two wolf paws, a lime green part is elongated with a black highlight, making the part asymmetrical.

Stalking is a light orange Energy Core. Mainly circular, its details consist of stylized wolf faces with long, pointy ears, triangular snouts and two linear eye sockets similar to the Decepticon symbol from Hasbro's Transformers toy line. Also, there are two diamond-like formations above each wolf head. Internally, it uses these pistons with several holes and mechanical-like parts. Some bandage-like holders also appear to compromise the external and internal parts. 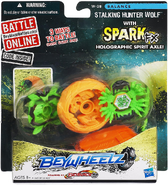 Contents.
Add a photo to this gallery

Retrieved from "https://beyblade.fandom.com/wiki/Stalking_Hunter_Wolf?oldid=300159"
Community content is available under CC-BY-SA unless otherwise noted.