Stone Monkey 85SD is a Defense-type Beyblade that only appears in the Metal Fight Beyblade manga. It was created and is used by Mawashi. It appears to be made

The Face Bolt features a monkey sticking it's tongue out.

A perfectly round Fusion Wheel, made completely of stone. It widens out at the bottom of the Fusion Wheel, similar to Rock or Counter.

85 is currently, the lowest Spin Track and thus, the best Spin Track for low attackers due to its Attack and Stamina capabilities. It is a top-tier Spin Track. However, its low height causes it to scrape the Stadium floor multiple times when it starts to lose Stamina. Due to this, some Bladers prefer to use 90 over 85. However, if placed with taller Performance Tips, like HF/S or RF, it can avoid floor scrapes as much as possible.

Although 85 can be countered with Spin Tracks like TH170 and 230, it still remains as an excellent Spin Track for Attack-type customizations.

Semi defense is not able to wobble as much as Defense, so for Defensive purposes. Defense should still be chosen over Semi Defense if you are trying to add some Stamina to your Defense Custom. with that said, Wide Defense would be a better choice than Defense for that situation, and also arguably for Stamina as well because of the even wider Tip. However, Eternal Wide Defense has more stamina then Wide Defense. With Wide Defense ,it is allowed to circle the stadium in some situations when it is on a larger angle towards the end of a battle, thus outspinning Defense or Semi Defense based opponents. However, sometimes this does not happen, and Semi Defense easily knocks over the wobbling Wide Defense custom before it topples over itself.

It comes down to personal preference when deciding whether to use Semi Defense or Wide Defense, because they are so closely matched. For pure Stamina it impossible to tell which would win a given match, but Wide Defense would prepare you for more situations by being able to take hits better than Semi Defense. Test both and decide for yourself which one works best for what you are trying to do. Depending on whether you are willing to sacrifice some Defense but for no more Stamina, but, overall, SD is a great tip. 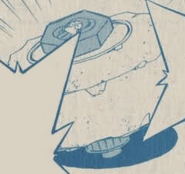 Stone Monkey prevented from spinning
Add a photo to this gallery
Retrieved from "https://beyblade.fandom.com/wiki/Stone_Monkey_85SD?oldid=314426"
Community content is available under CC-BY-SA unless otherwise noted.