Storm Aries 125S is a Stamina-Type Hasbro Beyblade and a variation of Rock Aries ED145B. It is only available the Darkness Howling Blazer 2-Pack, alongside a recolored version of Dark Wolf DF145FS.

The face bolt depicts Aries the ram. It is the first astrological sign in the Zodiac. The motif is a ram skull with "Aries" written in red on a black facebolt.

Aries was originally released as a dark pink. It features three “heads” which point outwards, hence forming a roughly triangular perimeter. This is a repaint version of the original Aries Energy Ring and is coloured black.

Storm has three wing-like forms for attacking the opposing beyblade. It is outclassed by the Ray wheel, due to better stamina and smash. It was originaly released in BB-28 Storm Pegasis and has slight upper attack but severely outclassed by Ray (as mentioned above), Vulcan, Lightning, etc.

The 125 Track is a midway between the 105 and the 145 Tracks. Utilized in mid-height stamina combos, it is more difficult to destablize compared to 145 height stamina combos. It has declined in popularity as the choice mid-height track due to the release of gimmicked tracks of the same height, such as T125 and D125.

Sharp was released as Spike in the Hasbro release.The Sharp Bottom offers very little movement and as such provides no attack potential. The pointed tip allows for very little friction between the Bottom and the stadium surface, which helps prevent the loss of spin velocity. However, due to the fine nature of the tip, the Bottom is easily knocked off stamine, and hence is outclassed by superior alternatives such as D or SD. WD may be also used for stamina purposes. 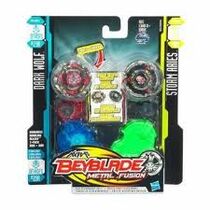 Darkness Howling Blazer, with Storm Aries and Dark Wolf
Add a photo to this gallery

Retrieved from "https://beyblade.fandom.com/wiki/Storm_Aries_125S?oldid=417890"
Community content is available under CC-BY-SA unless otherwise noted.