The Bey with a Hero's Name

Storm Northern Cross 125SF is a Beyblade owned by Gasur, the leader of Team Desert Blaze.

The Face Bolt depicts Cygnus, one of the 88 constellations in space. It's possible that the name of the face is Northern Cross, since it says that. The face bolt is light blue on the sticker, on a blue facebolt.

Main article: Energy Ring - Wolf
The edges of the Wolf Energy Ring consists of four wolf "heads", with one in each quarter of the Energy Ring. This equal weight distribution makes the Beyblade more stable, but Wolf is outclassed by heavier Energy Rings such as Aquario and Kerbecs.

Main article: Fusion Wheel - Storm
Storm is the first Attack Type Fusion Wheel released in the Hybrid Wheel System. As the successor to the Pegasis Wheel, it features a similar three-winged design, although these wings are flatter compared to Pegasis. Each of the wings have slightly jagged ends, which are used for mediocre Smash Attack. When paired with low Spin Tracks like 90 and 100, Storm was once a top-tier Attack Type part. However, it has since been outclassed by countless other Fusion Wheels, such as Vulcan, Lightning and later Blitz and Flash. In addition, Spiral can be considered the successor to Storm, with a similar shape and superior attack capabilties.

Main article: Performance Tip - Semi-Flat
Semi-Flat (SF) is a sharp tip with a flattened end. As a result, Semi-Flat displays a combination of Attack and Stamina qualities, moving in a semi-aggressive pattern. Because of this however, the two attributes are compromised, resulting in an average performance in both categories.

Semi-Flat produces a movement pattern that, while aggressive, is much slower than any flat Performance Tip. The increased friction with the stadium floor due to the wider tip both increases its Defense and Stamina in comparison to a bottom similar to Spike (S) or Eternal Spike (ES). However, it is in absolutely no competition with Performance Tips such as Wide Defense (WD) for Stamina or Rubber Spike (RS) for Defense.

Semi-Flat found a niche use in Destabilizer combinations, where a low Spin Track combined with Semi-Flat's balanced qualities allowed the Beyblade to destabilize the opposing Beyblade. 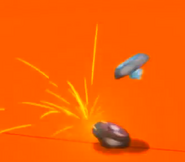