Main article: Energy Ring - Pegasus I
Energy Ring - Pegasus I Pegasus is the first of the Pegasus family of energy rings and as its name suggests, it is designed in the manner of a Pegasus' wings and head. As such, Pegasus is constructed of a plastic (specifically polycarbonate) and is meant to fit into the Fusion Wheel to provide weight distribution. It is primarily two-sided, with Pegasus' wings, appearing curved in two slots with various edges and gaps, while going into the neck of Pegasus which reaches into Pegasus' face. Pegasus also features stickers that emulate lightning-bolts while on a blue background. Pegasus is colored a translucent dark-blue.

Storm is a Fusion Wheel released as part of the Hybrid Wheel System. It debuted with the release of Storm Pegasus 105RF on March 29th, 2009.

The Storm Fusion Wheel has three wing like forms. The wheel is a cheaper alternative for that of Quetzalcoatl, and is considered by many to be inferior to the Lightning Metal Wheel. It is also inferior to Vulcan. Storm does give some smash attack but is too light to give out a considerable attack. Its counterpart Cyber is actually better since it's design was based on the original Pegasus Wheel, which is by far the second most effective wheel of all the Pegasus releases (Big Bang is the first). Cyber too, however, is also outclassed by other Fusion Wheels.

This Track is the fourth lowest Track available, but is outclassed in terms of Attack and Stamina by the 85, 90, and 100 Tracks. 105 has no problem with floor scrapes, but still is an outclassed part and should only be chosen when none of the aforementioned Tracks are available. 105 is the fourth lowest Track. It is able to help the bey sneak underneath Defense types and Stamina Types to attack. Although 85, 90 and 100 have been proven to be better options for most Attack types, 105 is still a decent option if the aforementioned Tracks are unavailable. 105 has also shown great value with HF, WD, RF and MF. It also can be used with R2F which is shown to be a bit less aggressive but has somewhat more stamina than 105RF.

RF has three different molds. The original TAKARA-TOMY manufactured RF, the SonoKong manufactured RF variant, and the Hasbro manufactured RF. Some of the TAKARA-TOMY RFs tend to spin around freely when twisted between fingers, due to the circular nature of the rubber that held the tip itself into place. However this problem was rectified by the SonoKong mold which flattened two opposite sides of the rubber that holds the tip itself into the plastic section of the Bottom itself. The flattened sides make it impossible to spin the tip freely, thus solving the problem. The Hasbro mold has a thick bar in the middle of the tip, securing the rubber.

The performance difference between the three molds is negligible, but it is likely that the SonoKong and Hasbro mold would be more sturdy by not spinning around.

Rubber Flat
Add a photo to this gallery 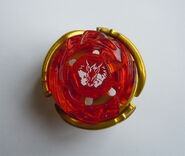 Storm Pegasus from the DVD set

Retrieved from "https://beyblade.fandom.com/wiki/Storm_Pegasus_105RF?oldid=382644"
Community content is available under CC-BY-SA unless otherwise noted.