The Bit Protector of this Beyblade is the Strata Dragoon Emblem. It is the first mold version of Bit Protectors

Metal Saucer has a very circular form, due in part to its Metal Frame which has 16 gear-like notches surrounding its perimeter. These notches, combined with its circular form, and very light weight make this Attack RIng an option for Spin Stealing.The Metal Frame rattles around no matter what parts it is used with. 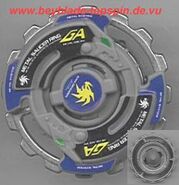 in the anime
Add a photo to this gallery
Retrieved from "https://beyblade.fandom.com/wiki/Strata_Dragoon_MS?oldid=156856"
Community content is available under CC-BY-SA unless otherwise noted.