Suou Goshuin (御朱印スオウ Goshuin Suou) is a character appearing in the anime/manga series, Beyblade Burst Super Z. He is a member of the Beigoma Academy BeyClub, along with Fubuki Sumie and a respected member as well.

As of now, not much is known about Suou’s personality, but what is known is that he is very calm and collected. He is very good at observation. He is also generally soft-spoken and polite when speaking to others.

Suou is always seen with Fubuki and is always with him during training which suggests that they are good friends. Suou also complements Fubuki during his practice. They are also both members of the Beigoma Academy BeyClub as well.

Suou is revealed to know Lui from when he was young. After being defeated by Lui, he came to admire him and strive to defeat him. In the present day, the two appear to be on good terms with each other, and Lui even allows Suou to watch and help him train for his upcoming Battle Royale with Aiga, Fubuki, and Ranjiro. 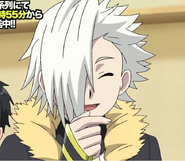 Retrieved from "https://beyblade.fandom.com/wiki/Suoh_Genji?oldid=347927"
Community content is available under CC-BY-SA unless otherwise noted.