View source
watch 01:40
Boba Fett Returns - The Loop
Do you like this video?
Play Sound

Synchrome (Japanese: シンクローム, Synchrom) is a Beyblade mechanic featured and introduced in the Beyblade: Shogun Steel toyline. It was first announced in the April 2012 issue of CoroCoro Comic, released on March 15, 2012.

Synchrome is essentially, swapping out a Beybattle Top's Crystal Wheel in exchange for another Warrior Wheel. This extra Warrior Wheel can be alternated with the other; used to change performance, increase/decrease balance and double the total weight.

For instance, Samurai Ifrit W145CF contains only one Chrome Wheel; Ifrit and one Crystal Wheel; Samurai. If one were to remove Samurai, they could exchange it for a second Warrior Wheel. If, for example, Ninja Salamander SW145SD was chosen, the Salamander Warrior Wheel could be placed underneath Ifrit, then locked into place and assembled. The result would be a Synchrome; Salamander Ifrit W145CF; with the bottom Warrior Wheel named first and vice versa. However, the Wheels are not required to stay in any specific order because they can be switched or flipped; such as Ifrit Salamander W145CF.

Synchrome is notorious for creating the heaviest Beyblade combinations ever known. Ifrit weights about 30.4 grams, while Salamander is 30.6 grams. Putting these two Wheels into a Synchrom will produce a whopping, 61 grams. Due to this, Synchrome combos are generally preferred over Beyblades of the Performance Top System, or even Hyperblades for that matter. Along with this, they leave Crystal Wheels in the dust as they have no actual use, competitively.

Synchrome is a recurring occurrence and plot device used in the anime series, Beyblade: Shogun Steel. In the series, the characters tend to team-up with other Bladers and use their respective Beybattle Tops to create Synchrome customizations.

These are the following, known Synchrome combos made in the anime:

Synchrome briefly appeared during the manga and was not essential of a plot device as in its anime counterpart; only appearing in two chapters and as one combo. This customization was Saramanda Ifraid W145CF, made between Zero Kurogane and Shinobu Hiryūin but only utilized by Zero.

The creation of Salamander Ifrit SW145CF 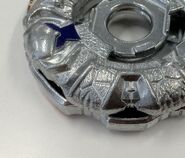 A side-view of Balro Balro.

The theoretical performance of Balro Balro.
Community content is available under CC-BY-SA unless otherwise noted.
Advertisement