Adachi has ties in Duel Masters, another franchise created by Tomy, in which Adachi created a manga unrelated to the main storyline of it. Also, while Metal Fight Beyblade was under development back in 2008, Adachi was asked by Tomy and quote, "Make a new Beyblade series unrelated to the first one." With this, Adachi quickly revived Beyblade and had it become even more popular than the original.

Adachi also has worked on other manga such as, D.M. Fighter Honoo as the author in 2006 and Kung-Fu Panda as the artist in 2008.

Adachi specializes in the shonen-type of anime and manga.

Kai-V, the head of the WBO asked questions to Adachi which were asked by the WBO community back in October of 2008.

Adachi: First of all, thanks to you who have read my cartoon.

Adachi: Next, my sincere apologies for not being able to succeed Mr. Aoki in his work. It is because I did not decide it.

Adachi: I was told to make a completely different story by Tomy. That was good for me. Disappointment from the fans were to be expected.

Adachi: I am happy to discover this new world though.

Adachi: I will answer a question

Kai-V: Why did you change Gingka Hagane's design from the first picture?

Adachi: Gingka was born 1 month ago, like the other characters.

Kai-V: How does this affect your work?

Kai-V: Beyblade, were you inspired by some small parts of it in general ? Had you read Takao Aoki's Beyblade work before ?

Adachi: I do my best not to use parts of the original Beyblade. However, "it is not thought that the forcibly different one is drawn. It follows the royal road."

Kai-V: When the Beyblade project was proposed to you, what were your feelings?

Kai-V: [Is it] easier/more difficult?

Adachi: ... I feel big pressure. A lot of voices also. However, my ability doesn't improve right now. It is only done to do now. I think that I enjoy it." 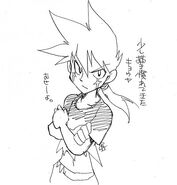 Retrieved from "https://beyblade.fandom.com/wiki/Takafumi_Adachi?oldid=311320"
Community content is available under CC-BY-SA unless otherwise noted.