Template:Infobox:Zero-G-Character Takanosuke Shishiya is the name of the character who appears in the anime and manga series, Metal Fight Beyblade Zero-G. He battles with his Archer Gryph C145S.

Takanosuke is medium tall. He has medium length tangled blond hair and blue eyes. He wears a baggy mustard yellow zip-up hoodie with purple stripes across his shoulders aswell as the inside of his hood being a light coloured lilac. On top of his hoodie he wears a necklace shaped like a hexagon with a red triangle facing downwards. His attire also comports brown fingerless gloves. On the back of his belt underneath the folds of his hoodie is a khaki green beycarrier in which he keeps his Bey, Archer Gryph C145S. He wears baggy dark blue jeans that too long for his legs.

In the begining he was thought to be quite cocky but after ren was sadened by her defeat he imediately encouraged her about her fighting spirit and how he felt her desire to win strongly which made ren feel better. Both Mal and Benkei agreed that his beyspirit burned brighter than zero's, even zero was surprised by his words.

Takanosuke is made his debut in The Hawk Has Landed, where he challenged Ren Kurenai to a battle. He easily beats Ren with his Special Move and battles Shinobu next showing to be a very strong blader as his bey was capable of constantly forcing opponents back during a clash which gave shinobu problems. After a close battle he falls to Shinobu's newly created Special Move, Infinite Fire Stream Assault. 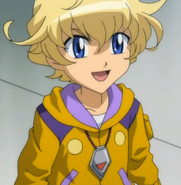 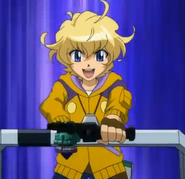 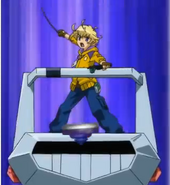 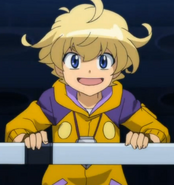 Takanosuke after being defeated by Shinobu.

.
Retrieved from "https://beyblade.fandom.com/wiki/Takanosuke_Shishiya?oldid=184864"
Community content is available under CC-BY-SA unless otherwise noted.