Tempo Hammer Hit is a Stealth Battlers Beyblade, part of the Extreme Top System. It is based on Twisted Tempo 145WD and was released in January 2012 in North America.

Tempo Hammer Hit resembles its regular counterpart, Twisted Tempo 145WD but features a blue opaque variant of Horogium, while its Face Bolt is an opaque dark blue with a printed, white Horogium motif. Its Fusion Wheel resembles Twisted but with two square-like holes at its sides to accommodate its "blue hidden hammers" that deploy during battle "to punch out and smash opponents", this can cause huge damage to an opposing beys stamina. It also seems to have blue protrusions under it, these protrusions are what trigger the hidden hammer mechanism. When hit, the "hammers" deploy.

However, its tiny peformance tip resembling a clear-blue WD wobbles, allowing the metal at the bottom to scrape the stadium floor, reducing its stamina a lot. Sometimes, the hammers completely backfire, resulting in a self-destruction. 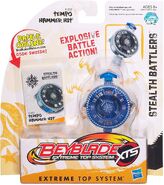 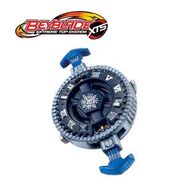 Retrieved from "https://beyblade.fandom.com/wiki/Tempo_Hammer_Hit?oldid=492442"
Community content is available under CC-BY-SA unless otherwise noted.