The Requiem Project is an event featured in the anime/manga series, Beyblade Burst Evolution.

The Requiem Project appears to be in a lab. The main part of it is obviously the capsule of which Shu was in during the project.

The Requiem Project was located in the laboratory of the Snake Pit Organization.

Shu underwent The Requiem Project after losing to Lui as Red Eye while battling with Legend Spryzen, only to have his identity revealed just after the battle. While he was in the project, he completed a series of tasks to achieve his newest Bey: The Perfect Beyblade Spryzen Requiem. The tasks he completed were to erase Valt from his mind, and to defeat Genesis Valtryek, Drain Fafnir, and Nightmare Luinor. He completed all of these, and afterwards his new Beyblade was created. After holding Spryzen, he was possessed by its spirit. Lastly, he tested it out in the stadium against holographic projections of Blast Jinnius, Surge Xcalius, Drain Fafnir, and Nightmare Luinor. He effortlessly won every hologram battle with a Burst Finish. 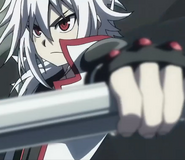 Retrieved from "https://beyblade.fandom.com/wiki/The_Requiem_Project?oldid=414592"
Community content is available under CC-BY-SA unless otherwise noted.