Thermal Gemios T125S is a Stamina-Type Beyblade owned by one of Marcus' friends, Tony. It was also released in a 2-Pack with Poison Virgo ED145ES. This particular Beyblade was only produced by Hasbro.

The face Gemios is based off of the Zodiac sign, Gemini due to them having two sides (Fire and Ice).

The color of the one that comes on Thermal Gemios is actually red. The one shown on the picture comes on Evil Gemios. It balances the Bey it is put on.

Thermal is a stamina surprisingly lighter than Flame due to size. It has alot of stamina, and little of attack. However, there are better options for defense. But Thermal is still a good fusion wheel with some attack, moderate defense and great stamina.

The Sharp Bottom offers very little movement and as such provides no Attack potential. The pointed Tip allows for very little friction between the Bottom and the stadium surface, which helps prevent the loss of spin velocity. However, due to the fine nature of the Tip, the Bottom is easily knocked off Balance, and hence is outclassed by superior alternatives such as ES, WD or SD. This Tip is outclassed and deemed pathetic among Stamina types. It isn't as powerful as an ES or other Stamina type performance tips but S is still a powerful tip. The Track usually touches the floor when got attacked strongly. It is NOT a defensive tip

S is obviously a sharp Stamina tip. It has hardly any Defense or Attack due to very low friction. S is outclassed by tips such as WD, AS, EWD, SD and even D and B. It is still a decent option for stamina if the aforementioned tips aren't avaliable.

In the Zero-G stadium despite it's performance in the usual staiums is very useful as the sharp design minimizes the effect of centrifugal force in the stadium, this makes it a great defensive tip in the zero-g stadium 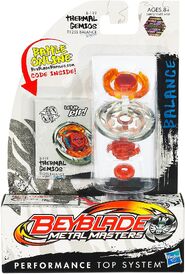 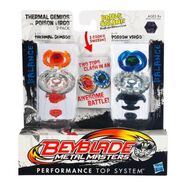 The double pack Thermal Gemios is featured in.
Add a photo to this gallery

Retrieved from "https://beyblade.fandom.com/wiki/Thermal_Gemios_T125S?oldid=224037"
Community content is available under CC-BY-SA unless otherwise noted.