The Face Bolt depicts "Lacerta", one of the 88 constellations in space. Lacerta is Latin for "lizard." Lacerta is also a genus of desert lizards, which contains more than 40 species.

Lacerta is a bright pink Energy Ring with two pink lizard molds and two pink and blue "clumps" extending out. By looking carefully, you will realize the "clumps" form the word "lacerta". Although it is considered a balance Energy Ring in Beyblade: Metal Masters, in real life it has great upper attack capabilities. It can be used effectively against 230 combos when using it in this attack combination:MF-F Spiral Lacerta 130R²F. To test its upper attack, you can put your hand on top of it while it is spinning at full speed. But this is not recommended because it may damage your skin.

Thermal has two main sections. Thermal is larger than Flame, which adds weight and spin time. It also has better Defense than Flame because it is thicker and heavier. The small indents provide a miniscule amount of Smash Attack, but Thermal is generally not used for Attack as it is a Stamina wheel. The combo, if desired, to also utilize slight upper attack is Thermal Pegasus 100F and Thermal Lacerta LW105LF for smash attack. The Thermal Wheel was first released with Thermal Pisces T125ES. It is outclassed by Flame, Burn, Earth, Basalt (Twisted), Scythe and Phantom for Stamina.

Wing Attack 130 is a Spin Track only featured on Thermal Lacerta and Burn Serpent from Random Booster Vol. 5. It resembles Wing 105 Track but without the two small pointed wings and a larger space coverage. The wings can be removed to become a 130, although illegal. This Spin Track only just pokes out of Thermal. This can also be switched from clockwise to counter-clockwise and is free-spinning. Because it is free-spinning, it is possible to remove the wings and place them on ED145, creating WA145 and ED130, however, this is illegal and cannot be used in tournaments. WA130 is a 130-height Track with two aerofoil-shaped wings that rotate freely around the Track. By removing this piece, and flipping it over, the direction of the wings can be changed i.e., Attack Mode & Defense Mode. These wings are negligible in battle: while they offer minor protection against lower Attack-Type opponents, there are better Tracks for this purpose. The wings can scrape along the stadium floor, causing a loss of spin, so WA130 is useless in Stamina combinations. WA130 can be used in various attack combos such as Evil Leone WA130WB however it is not recommended you use this combo a lot because it is so aggressive it sometimes knocks itself out of the stadium.

The main appeal of this Track is its height. The 130 height has proven useful in certain Attack customizations. However, as it cannot make contact with lower opponents due to its free-spinning nature, it is considered less useful for this purpose than S130. In addition, the most popular user of this height, Fang, already comes with a plain 130 Track in its 3 releases, Fang Leone 130W²D, Twisted Tempo 130RS and Forbidden Eonis 130D.

Hole Flat has a very similar movement speed to that of Flat, with the main difference being a slight Stamina improvement due to the hole in the middle of the tip. However, with this comes the detriment of even less grip to the Stadium floor than Flat, and also increased fragility. Due to this, HF dents, and can even break due to this. HF has good stamina even though it's an attack bottom. HF wears down after a while and, is not, therefore, advised for tournaments, unless you have a couple new HF tips on hand. Though HF has good Performance Tip capabilities, it is not recommended to be used when worn down, because its capabilities will be lost. 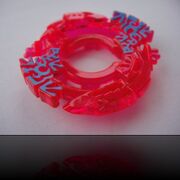 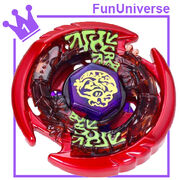 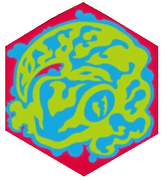 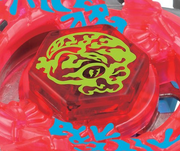 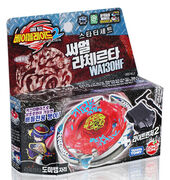 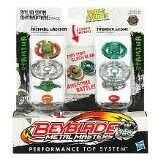 Up-Close recolor of Thermal Lacerta that comes in the double pack.