Phoenic depicts the Phoenix, a mythical firebird which rises from its ashes for in some way, immortality. In a stylized design, it has the phoenix screeching upwards, with its curved beak and eye. It is surrounded by a region of inferno, yet create an illusion of the phoenix's wings. The flames/wings are quite large, curved, and explicit; giving way to the phoenix in all its glory. The motif is silver and printed on a black Stone Face Bolt.

Phoenic is as its name suggests, influenced by the phoenix. Being three-sided; made of three "wings", all facing to the right, and interestingly, all feature a various amount of varying sizes of the heads, of a phoenix. The heads are detailed with a pointed beak, an elongated back head, as well as decals creating the phoenix's eyes. Feathers also appear; between each phoenix face, with a fire detail keen to them. When looked from a certain glance though, the Chrome Wheel as a whole, appears as three phoenix wings.

The phoenix faces are all specifically designed, in a similar, yet different manner. The faces to the far left are all looking to the right, while the faces at the far-right, appear to be looking downwards. Lastly, the faces at the bottom, are facing the right, yet their eyes are looking in the opposite direction. There are four phoenix faces on each side, making a total of twelve heads, though one face at the right is only compromised as a sticker, with no actual detail.

Thief is a semi-transparent bright yellow in colour. It is made-up of three "wings" right-sided with which, are built of feathers of a phoenix. About three wings on each side, all long and thin. The wings also vary in size and give Thief, a somewhat of an erratic design. Lastly, Thief carries a fire symbol. 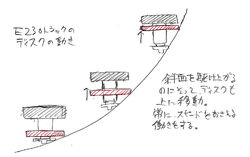 E230 is built of two parts, the 230 part, and the ring. Its 230 part is shaped as a cylinder, yet with a circular "base" covering the main part of the part itself; very different than 230 indeed. The other part, the ring on the other hand, is obviously shaped like a ring. Very similar to the Boost Disk of BD145, both in design and width. What differs however is, E230 is made of four "connectors" and small, rectangular prostrations along the exterior of the ring.[3]

E230's intended use is when in the Zero-G stadiums, the disk is meant to move upwards and downwards, just like an elevator. With it, it's meant to provide a "balance-reflex function"; countering the tilting angle of the Zero-G Stadiums and help retain its balance. The disk moves by itself, and cannot be put into a position that stays still, as it will always move.

During testing, E230 appeared to score successful results for Defense. Brood, a member of the WBO, showcased this by creating battles between an MF-H Duo Auqario E230CS against a Flash Sagittario II S130RF. Since Flash is at the top of the metagame at the moment, this came a surprise to many.

Under 20 battles, MF-H Duo Aquario E230CS won in 13 out-spins, against Flash Sagittario II S130RF which obtained 7 knock-outs. CS was later changed to RS and yet, scored a better win rate, with 17/20 out-spins against the said Flash combo. More testing followed with Flash's S130 changed to R145 and then 230. In the end, the Duo combo scored about the same win rates as before, proving that E230 does have potential as a Defense-Type Track.

E230 appears to have use when in conjunction with GCF. GCF's ring is said to have helped the Bey from moving too fast, thus helping as a stable Defense-Type.

Gear Circle Flat (GCF) is the very-first variant of Circle Flat (CF). Appearance-wise, GCF generally resembles CF with noticeable differences however. As its name suggests, GCF has a gear-like shape, with gear-like ridges lining around the wide ring. The geared ridges also appear inside the protrusion, where the Flat tip appears. The last major difference, is that GCF's Flat tip, is slightly wider. It makes it harder for Phoenic to get knocked out of the stadium holes. Note that the circle part can break easily, so make sure you don't pressure it to much.

Zero-G testing GCF appears to have use when in conjunction with E230. GCF's ring is said to have helped the Beyblade from moving too fast, thus helping as a stable Defense-Type.

Thief Phoenic is based on the Phoenix, as evident by its name. In mythology, the phoenix was a sacred firebird made of a large variety of colours and such. The phoenix would usually live for about a 500 life-year span, while at the end of it, creating a nest of twigs. The phoenix and its nest would burn into nothing more than fiery ashes; where in turn, a new phoenix or phoenix egg would appear. This new phoenix would then be destined to live for as long as its ancestor; thus being reborn. As is, the whole purpose of the phoenix: to be reborn and in a way, live forever; immortality.

The phoenix appears in many different cultures, mythology, and such. The aforementioned Bey has of course, a phoenix motif. This can be seen with its Stone Face, as well as its Chrome Wheel.

The name "Phoenic" can quite possibly be a portmanteau involving two other words. The first, can be of "phoenix" and "Phoenicia". This is because the phoenix also has mythological roots in the real-world place of Phoenicia. The second possibility, is between "phoenix" and "fushichō". Fushichō[6] was the Japanese name for the phoenix and literally meant, "immortal bird". Although, another reason for "phoenic" can be simply because, the name Phoenix was previously used, so it was simply change one letter to avoid confusion over the former.

Thief obviously refers to a person committing thievery; the stealing of another person's belongings without their consent.

Retrieved from "https://beyblade.fandom.com/wiki/Thief_Phoenix_E230GCF?oldid=178318"
Community content is available under CC-BY-SA unless otherwise noted.