The Face on this Beyblade depicts Libra, the seventh astrological sign in the Zodiac and of the 88 constellation in space LIBRA . Libra’s symbol is The Scales, and this motif is featured on the Beyblades Face and Clear Wheel. Unlike Flame Libra's face, this one does not have "Libra" printed on it. Libra exists only in Greek mythology,

This release of the Libra Energy Ring is lime green in color.

The original mold of Libra does not fit Metal Wheels correctly, resulting in a loose fit and rattling. This is later rectified in the Hybrid Wheel Reshuffle Set (Stamina & Defense) release.

The Thunder Fusion Wheel is just like the pre-HWS Libra Fusion Wheel. It slightly resembles the Heat light wheel. It is also named "Infinity" and Solar in Japan as a prize Beyblade. The Libra Fusion Wheel at one point was actually banned in Japan due to its heavy weight. It is now legal though, ever since the Twisted Fusion Wheel came out in Japan. Also, out of all the Legend series it is the top Defense Fusion Wheel, however it is outclassed by other top tier Fusion Wheels like Earth and Twisted. As for Stamina, Thunder is deflective and light, making it very useful, but still, Earth and possibly Burn outclass it. Thunder also features blue paint in some areas.

DF145 has four upward facing wings protruding from the top of the Track, which aside from giving it extra weight are meant to push air downward to increase balance. It has about the same effect of UW145, but the effect is negligible. Thus, DF145 and other 145 Track-based Stamina customs–which perform poorly against both 85 and 230-based Stamina customs–have been outclassed.

Use in Stamina Customizations

If the aforementioned parts aren't accessible, DF145 can still be put to good use in the custom, Burn Bull DF145SD. The SD provides extra Defense for the Beyblade.

BS offers very little movement and provides no Attack potential. The pointed tip allows for very little friction between the Bottom and the stadium surface, which helps prevent the loss of spin velocity. BS has decent to mediocre Stamina, but it experiences the balance issues that the S series bottoms share because its tip is so fine. The Tips D, WD, WB and SD are better choices. BS stands for Bottom Spike,even though in the picture it says ball sharp. 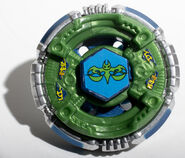 the LIBRA constellation .
Add a photo to this gallery

Retrieved from "https://beyblade.fandom.com/wiki/Thunder_Libra_DF145BS?oldid=357064"
Community content is available under CC-BY-SA unless otherwise noted.