Torch Aries 125D is a Defense-type Legend Beyblade. It is a variation of Rock Aries ED145B and the Legend version of Aries 145D. It was only released by Hasbro. It was re-released with the Metal Fury Beylocker.

The Face on this Beyblade depicts Aries, the first astrological sign in the zodiac and of the 88 constellation in space by the name of ARIES . The bolt depicts the ram as a skull. Like all Legend Beyblades, there is print on the Face Bolt. The bolt has a shiny gray color.

Aries was originally released as a bright pink Energy Ring with three “heads”, which point outwards, hence forming a roughly triangular perimeter on the Spin Track. It was then released in a new color, a dark violet. (If you turn it 180 degrees it will appear like it will have two modes, but only placed on Fusion Wheels with 3/6 "Wings").

Torch is based on the Pre-HWS Aries Metal Wheel. Torch is designed to "fit in" with the Aries energy ring. It has three shorter heads and three long walls between the heads. Due to Torch being light, and combined with its poor contact points and high recoil, it is thoroughly outclassed, even by Poison, and should never be used competitively. Takara Tomy later released this as "Cloud".

The 125 Track is halfway size between 105 and 145 in terms of height. It is used in Stamina combos, and is harder to knock over than Stamina combos with 145 in them. Due to the release of gimmicked Tracks like D125 and T125, the popularity for this Track has declined.

This is a Defense Bottom, which acts as a wider version of a Sharp Tip. When hit by an opponent, a Beyblade with this Bottom will have lessened recoil and will recover from Attacks more efficiently than a Sharp Tip. However, while recovering, the Defense Bottom will cause the Beyblade to lose some Stamina, caused by the added friction. It was outclassed by WD, SD for Stamina. 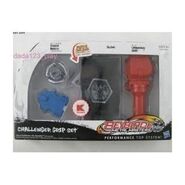 Kmart exclusive pack with a Launcher Grip and a glove. 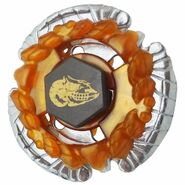 torch aries 125d
Add a photo to this gallery

Retrieved from "https://beyblade.fandom.com/wiki/Torch_Aries_125D?oldid=357065"
Community content is available under CC-BY-SA unless otherwise noted.