Torch Gemios W105CS is a Attack-type Beyblade. It was released in the Crushing Blast 2-Pack with a recolored version of Rock Zurafa R145WB.

The Gemios Face Bolt depicts Gemini, the third astrological sign in the Zodiac. The face itself depicts two spirits (flame and ice). The face is manufactured with the Pre-HWS design printed on, and a new, more colorful version can be added with one of the 2 Gemios Face Stickers in the Hybrid Wheel Reshuffle Set: Attack and Balance Type.

Gemios follows the same aesthetic principles as the Gemios Metal Wheel and Killer, with a similar two-winged design. It is the lightest Clear Wheel available, however, it can be used in stamina combos with a heavy track. It is a deep crimson in this recolor.

Torch is based off of the 4-layer Aries Fusion Wheel. Torch is designed to "fit in" with the Energy Ring Aries. It has three shorter heads and three long walls between the heads. Due to Torch being light, combined with its poor contact points and recoil, makes it thoroughly outclassed and should never be used competitively. Torch is one of the lightest wheels, if not the lightest. Takara Tomy renamed Torch into Cloud in Random Booster Vol. 9 Fusion Hades.

This Wheel could be used for Stamina, but this is not recommended. You can put the Destroyer Energy Ring on Torch, but this is illegal and breaks easily.

Coat Sharp is more akin to Rubber Flat Sharp or a variation of Rubber Flat, but with a Sharp tip coated in rubber, hence the name "Coat" Sharp. It is commonly chosen in Attack and Defense-Type combinations as when launched, the Coat Sharp will have limited movement due to the Sharp Tip, however, if it gets knocked off balance, it will act as a Rubber Flat and provide fast and chaotic movement. If used with a String Launcher, the Coat Sharp will move aggressively like a Rubber Flat but act as a Defense-Tip later due to the Sharp tip. Due to this, it is similar to the mechanism in Final Survive.

Overall, Coat Sharp is a great Tip for Attack and Defense combinations and resembles a grey Rubber Flat but with a grey Sharp Tip in the center of the red rubber. The sharp is more rounded than usual. In this version, it has a yellow recolor. Torch Gemios CS's rubber is a little less firm than that of Hasbro's Ray Striker. 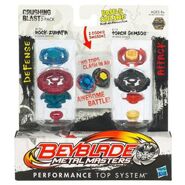 Retrieved from "https://beyblade.fandom.com/wiki/Torch_Gemios_W105CS?oldid=312279"
Community content is available under CC-BY-SA unless otherwise noted.