Trygle is an Attack-type Beyblade and was Michael's first Beyblade.


The construction of Triple Wing mainly consists of three large spikes, with some inset notches strewn throughout. While the spikes are angled slightly upwards, the Upper Attack present is negligible. However, these spikes and notches make for excellent Smash Attack.

Triple Wing found its home among Smash Attack enthusiasts simply because it is so good and consistent at what it does. Recoil is a big problem with Smash Attack, but Triple Wing seems to rarely suffer from this. Enough surface area of Triple Wing is laden with attacking projections that it can consistently deliver critical hits and KOs to opposing Beyblades.

Using a metal tip and the HMC, this combo has a strong movement speed, but also has enough Survival to deliver decent hits even as it's slowing down. The heavy weight allows it to move to the center quickly, rather than wasting energy circling the outside of the stadium. Wide Defense is a perfect match for Triple Wing; the notches work to increase Smash Attack, and the weight being focused along the outside increases momentum.

This combo is a bit riskier. Grip Base is incredibly quick and light, making it hard to aim and control properly. However, an early hit is almost impossible to survive. If your shooting ability is strong, you can make very good use of this combo.

SG Spring Version is essentially an incredibly long, extendable and retractable tip attached to a spring. It only functions in conjunction with Jumping Base (Trygle), which contains a switch that sets it off and makes it jump. Otherwise, all you're left with is an incredibly tall, susceptible SG.

Blade Base: SG Jumping Base

Jumping Base (Trygle) is affixed with two wings that, when hit, activate a switch that causes the spring-force tip SG Spring Version to be expelled from the base, causing it to jump. Unfortunately, the jumping gimmick is just that: a gimmick. It has no practical use whatsoever. The wings are incredibly susceptible to recoil and breakage, and the extreme height makes it incredibly easy to knock off balance. The best you can hope for is a very lucky KO. 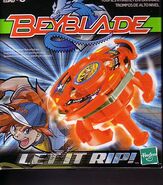 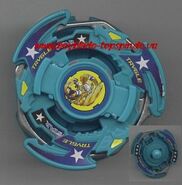 While the Jumping Base leaves much to be desired, Triple Wing does not. It is generally regarded as one of the best regular Smash Attack ARs, alongside Eight Spiker, Cross Griffon and Triple Tiger. While the range of competition means that Bladers should consider alternatives, particularly the cheap and widely available Triple Tiger, nothing can change the fact that Triple Wing is a highly effective part and a welcome addition to any Blader's collection. This Beyblade is not a must-have, but it is nevertheless a welcome addition to any collection.

Retrieved from "https://beyblade.fandom.com/wiki/Trygle?oldid=421468"
Community content is available under CC-BY-SA unless otherwise noted.