Trygle 2 is an Attack-type Beyblade and is Michael's second Beyblade. This was released by Takara in Random Booster 9 as one of the three prize beyblades.

Triple Beak depicts three eagle heads in a triangular formation reminiscent of Trycutter. The main contact points of Triple Beak in either spin direction are the sides of each triangular eagle head, and like all Attack Rings which use large, flat areas as contact points,Triple Beak produces large amounts of Recoil and very little else, rendering it useless for any sort of competitive customization. Furthermore, Triple Beak is a rather thin Attack Ring, and combined with its large, flat contact points this results in breakage issues, which are only compounded by the price and rarity of the part. As a result of these many issues, Triple Beak should not be considered for competitive use.

As Trygle 2 was released by Takara in a Random Booster, the Weight Disk received is random. The possible Weight Disks are: Star Attack, Revolver Attack, 10 Heavy, 10 Balance, and 10 Wide.

This is often considered the successor of the Sharp Blade Base. The pointed tip allows for very little friction between the Beyblade and the Stadium surface which helps maintain high spin velocity. This offers very little movement and as such offers no Attack potential. This part is also often thrown off balance and can be easily toppled over. This in turn sacrifices all Defense ability. While this can be used as an advantage in some situations, there are far better choices than this part for Stamina types. This SG Sharp is different than other SG Sharp models. It has clips that extend far enough to make the outside of the SG Sharp base a perfect circle. 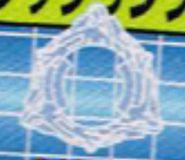 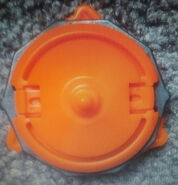 Trygle 2 (Bottom View)
Add a photo to this gallery

Trygle 2 is quite rare and as a result rather expensive and generally prized by collectors. However, it has no competitive use, being composed almost entirely of useless or heavily outclassed parts. The only useful parts it comes with, the Spin Gear Casings and some of the possible Weight Disks, are available in many more useful, common and less expensive Beyblades. As such, this Beyblade is only worth purchasing for collection purposes.

Retrieved from "https://beyblade.fandom.com/wiki/Trygle_2?oldid=473090"
Community content is available under CC-BY-SA unless otherwise noted.